Bosnians Protest Against Corruption in Judiciary

Hundreds of Bosnians protested on Wednesday against corruption in the judiciary and called for resignations of top judicial officials whom they blame for the lack of rule of law in the country. 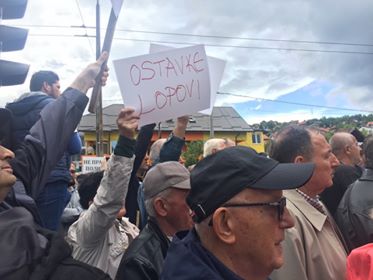 Protest against corruption in judiciary (Photo by Ivana Saric)Flanked by police, the protestors in front of the state courthouse in Sarajevo chanted “we want the truth” and called for the resignation of members of the High Judicial and Prosecutorial Council (HJPC) - a body that appoints and disciplines judges and prosecutors.

“To have justice and rule of law there has to be an honest, fair, independent, and professional judiciary,” Mektic said, addressing the protesters. His words were met with shouts of “that’s right!” by the crowd.

The Minister lamented the fact that in Austria a secretly filmed video exposed recently the corruption of a top politician and promptly led to multiple resignations, while in Bosnia no such thing has happened.

Among the banners protesters held, many hoisted signs calling for justice to be served to the families of David Dragicevic and Dzenan Memic, two Bosnian youths whose unexpected killings in 2018 and 2016 remain unsolved. Some protestors believe that authorities are complicit in a coverup related to their deaths.

Zana Bajic, 61, who retired in January after having worked in the administration of the court for 15 years, told OCCRP that she witnessed and heard lots of instances of corruption in the building she was protesting in front of.

“I could hardly wait to stand here,” Bajic said. Although she is retired, she came to fight for the future of her children, she said, adding she hopes protests like this can bring change.

“If we aren’t willing to do something for our lives, I don’t know who will,” she said.

On Tuesday representatives of the EU, the OSCE and the US Embassy in Sarajevo sent a joint letter to Tegeltija and his colleagues which outlined several existing problems of the HJPC, as reported by N1.

While they praised the adoption of several important reforms in 2018, they noted that there were several “worrying phenomena” that hindered the implementation of the reforms.

The letter reprimanded the HJPC for its apparent favoritism and inconsistent approach to appointing judges and prosecutors, as some nominations were processed quickly while others languished for months, if not years.

In addition, they note that according to the rules, documents related to a nomination must be delivered to the council members at least 48 hours before the convening of a session but that in several instances this rule was not adhered to, implying that many members came unprepared for session at which judges were appointed.

The letter stated that such inefficacies undermine the rule of law in Bosnia and Herzegovina.

"The recent demands to reduce the degree of transparency and the quality of these reforms cast doubt on the commitment of the judicial functionaries to strengthening the integrity of the judiciary and are in direct contradiction with European standards,” the letter states.

These negative developments in the judiciary could lead to a shrinking of financial assistance from international actors, they warn.

Mustafa Mulamerovic, who traveled from the northern city of Tuzla to join the protest, told OCCRP he was fighting with courts over a lawsuit for six years, which is how he realized the system is corrupt.

“Every country has its own mafia, only our mafia has a state.” said Mulamerovic.