Australian Politician Pays US$48.2 Million to his own Campaign

United Australia Party leader Clive Palmer has contributed AUS$70 million (US$48.2 million) to his party’s campaign, which ends on election day this Saturday, most of which he earned thanks to tax cuts he helped pass, media reported on Thursday. 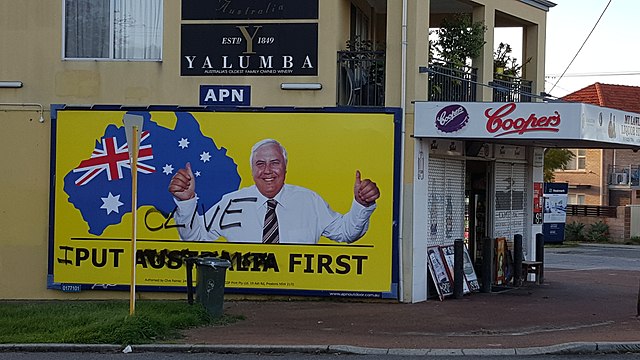 Clive Palmer 2018 billboard (Photo: Perth Jaywalker (CC BY-SA 4.0)As a senator from 2013-2017, Palmer supported the abolition of the carbon tax and the 30% mining tax, which his mining businesses benefited from in the years after the 2014 votes. Now he’s funding his non-consecutive term with this cash.

"We've run about 60,000 TV advertisements across the country to date, and that number is going to increase to about another 90,000, so it’s going to be very, very significant,” Brian Burston, a UAP senator told Australian news station 7.30.

Palmer personally financed the campaign ads which cost $41.3 million, more than double what his party (then called Palmer United Party) raised in its 2013 campaign, when all but $206 was paid by Palmer’s extensive business empire.

In a 2013 interview with 60 Minutes Palmer hinted at his personal wealth, which has been estimated anywhere from $343,000 to several billion.

“I think a bit more than that [$515 million], certainly a lot more, you can multiply it a bit,” Palmer said.

This isn’t the first time Palmer and his family have been under scrutiny, as his wife and then-director of his company Mineralogy was asked to testify about $123.8 million loan the business gave to a Palmer project in Bulgaria.

The upcoming election will be the first to allow voters to rank their preferences, previously defaulting to the preference of the party they voted for.

Palmer’s party, which has candidates running in every state and territory across the country, is typically coined as a centrist party supporting tax cuts, softer immigration policies, and an increase to pensions.

Palmer is known for the collapse of his Queensland Nickel refinery, which left a debt of $206.4 million to workers, creditors and small businesses.

He promised he would pay $4.3 million to workers who lost their jobs after the company’s collapse but has been conditioning the payment with a gag order, obliging workers not to talk bad about him.