Ex-First Lady of El Salvador Will Plead Guilty to Corruption

The former first lady of El Salvador, Ana Ligia Mixco de Saca, will plead guilty to her role in a corruption scheme that saw US$25 million of public money laundered during her husband’s presidential tenure, El Diario de Hoy, a leading newspaper in the country, reported. 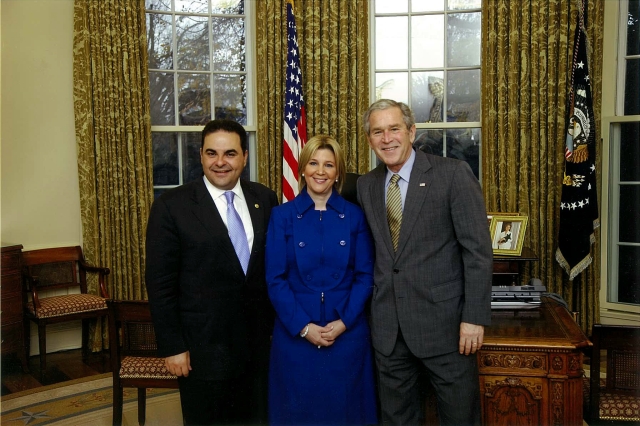 Ana Ligia Mixco de Saca poses for a photograph in the Oval Office with her husband, President Tony Saca, and U.S. President George W. Bush, on December 16, 2008. (Photo: White House)Ligia’s husband, Antonio “Tony” Saca, who ran the country from 2004 to 2009, is already serving a ten-year prison sentence after he pleaded guilty to diverting more than $300 million in state funds to his own businesses and third parties. He was sentenced last September, becoming the first Salvadoran ex-president to be convicted of corruption.

Ligia was charged alongside 14 others, including her brother, Oscar Edgardo Mixco. Her plea deal, discussed in court on Monday, will grant her an abbreviated legal process and require her to complete community service in lieu of three years in prison.

Humberto Saenz, a political analyst and head of the civic society organization Citizen Action (Acción Ciudadana) commented on the decision on Twitter, saying “I think it is legitimate and necessary to use the abbreviated process tool in crimes of grand corruption. I do not think that as a result of it, a confessed person does not fulfill the penalty of imprisonment.”

The people of El Salvador, 31 percent of whom lived in poverty in 2016, have long been the unfortunate victims of political corruption.

Tony Saca’s presidential successor, Mauricio Funes, was convicted in absentia in November 2017, along with his son Diego, of illegal enrichment after failing to account for $206,665 of his assets. The former president, who sought asylum in Nicaragua in 2016 after claiming he was being politically persecuted, was ordered to pay nearly $420,000 in restitution to the government.

Francisco Flores, president before Saca, was also accused of corruption, but died before the matter was resolved. Flores was accused of diverting $15 million in aid money from Taiwan after two earthquakes devastated the small Central American nation in 2001.

El Salvador’s new president-elect, Nayib Bukele, a former mayor of the capital city of San Salvador, will take office this June, and has promised to break the cycle of corruption.

“We have turned the page on power,” the energetic 37-year-old said after learning of his election win.