Claims that a convicted New Zealand drug trafficker bribed his way out of being deported have been referred to a federal anti-corruption agency, Secretary Michael Pezzulo of Australia’s Home Affairs department told a Senate Estimates hearing on Friday. 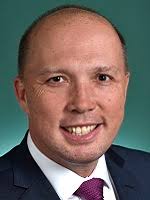 Australia's Minister for Home Affairs Peter Dutton has been accused of accepting bribes by a detainee in an Australian immigration center (Photo: Parliament of Australia)"It would be remiss of me not to draw that to the commissioner's attention," Pezzulo said but claimed that his department had found no evidence to support the allegation.

In a February 10 blogpost a detainee of one of Australia’s onshore immigration detention centres, Nauroze Anees, accused the Home Affairs Minister Peter Dutton of personally benefiting from bribery.

The matter concerns Section 501 of the Migration Act, a 2014 amendment by the current ruling party allowing the cancellation of visas, meaning deportation, on character grounds. ‘Character grounds’ constitutes having been convicted of a crime, including petty crimes such as shoplifting or driving offenses.

Anees himself landed in a detention center after he had his visa cancelled for “recklessly causing injury” after an incident involving a group of eight who had attempted to physically assault his partner. He alleges that William Betham, an inmate, was released from detention after a payout of $80,000 Australian dollars (US $56,716) to the Minister’s office.

Betham, a New Zealand born Australian resident who served eight years in prison after being convicted for both drug trafficking and being a part of a drug cartel, spent an unusually short amount of time in detention, about four months, before he was released.

Meanwhile, Anees has been in detention since October 2016 after having spent only three months in jail in 2011, three years prior to the Migration Act's amendment being implemented. Betham is now living on the Gold Coast in Queensland.

Anees alleges that Bethem told him that if he wanted to get out of detention, the best way was to“organize $80k and transfer it into an account (of a person in Brisbane), I have a good connection to the Minister’s office, and you will be out in a matter of months, my case is sitting with Minister Dutton’s office right now, I’ll be out in a matter of days, Minister Dutton will personally give me my visa back.”

Anees’ claim was looked into by Australian media which found that “almost one-third (of the 640 non-citizens whose visas were canceled automatically after serving jail time for serious crimes) got their visas back.”

Some of these re-issued visas were granted by the AAT or the Federal Court, but others including Betham’s were “assessed within the Department of Home Affairs and the decisions never made public.”

The decision can be appealed with the Administrative Appeals Tribunal (AAT) or the Federal Court, but the process can take years. By late 2018, Australian media reported that the AAT had a backlog of 53,000 unresolved cases it was working through.

In a recent news article by Independent Australia, Anees also alleges that the AAT is “an extension” of the current ruling party, rather than an independent tribunal since the current Government came to power in 2013.

While the Minister himself has called them “entirely false,” allegations of corruption within the Home Affairs office are mounting. They include the government’s private security contract on the offshore detention centers located in Papua New Guinea which, at $422 million over less than two years, is estimated by security experts to be inflated by $17 million per month, especially considering security officers employed by the company are paid $2 per hour.

Anees claims he is being abused by guards in the onshore detention centre, and that he is being denied medical care in retaliation for the allegation.