Over twenty members of the European Parliament demanded on Thursday sanctions against two bankers whose banks were involved in a money-laundering scheme that has moved billions of dollars from Russia to the west. 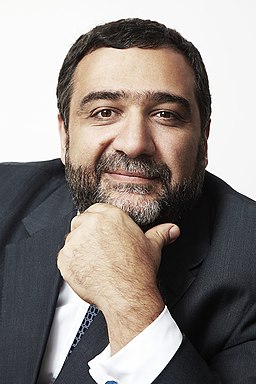 Ruben Vardanyan (Photo: Natalie Ko [CC BY-SA 4.0])Ruben Vardanyan, the former president of the Russian investment bank Troika Dialog, and Vladimir Romanov, the former owner of Lithuania‘s Ukio bank have caught the MEPs‘ attention after OCCRP and partners published their investigation into the Troika Laundromat – a network of companies and accounts, set up by Troika and operated through accounts in Ukio.

“We urge the Commission to immediately start all necessary procedures in order to ensure that these and other persons involved in the Troika Laundromat case are put under the EU sanctions,” a letter to Jean-Claude Juncker said.

The request was initiated by Lithuanian MEP Petras Austrevicius and signed by 21 MEPs from 14 EU countries, including Germany, the UK, Belgium, Finland, Sweden and Poland. Apart from sanctioning the bankers, the MEPs suggested a “EU-wide anti-money laundering supervisory authority” to be set up as soon as possible.

The signatories stated that the Troika Laundromat, along with previous money laundering scandals, has “revealed the EU’s vulnerability and unpreparedness to fight financial fraud and money laundering”.

The Troika Laundromat, an investigation based on a banking data leak obtained by OCCRP and 15min.lt, exposed a network of more than 75 companies set up by Troika Dialog.

Operating mostly through accounts in Ukio, these companies were used to launder some of the money from a US$230 million theft from Russia’s Treasury that was uncovered by lawyer Sergei Magnitsky before his death in a Russian jail, as well as funds from other well known frauds that took place in Russia.

Companies belonging to Vladimir Putin’s close friend Sergei Roldugin received nearly $69 million of which at least 11.6 million should have been halted and reported to law enforcement due to their highly suspicious nature, according to the chairman of Lithuania’s central bank.

Ruben Vardanyan said he had no knowledge of these operations or any other wrongdoing by Troika. In a recent response to OCCRP and 15min.lt, Vladimir Romanov - who fled to Russia shortly after his bank collapsed  - stated that money laundering allegations are nothing but “a myth.”

Romanov also accused the journalists behind the story of working for either the Swedes, the Americans or “the devil.”