A Tanzanian Magistrate’s Court sentenced on Tuesday Chinese businesswoman Yang Feng Glan, nicknamed “Ivory Queen,” to 15 years in prison for running a large-scale smuggling operation which delivered ivory from the tusks of more than 350 elephants, worth US $6.4 million, to Asia. 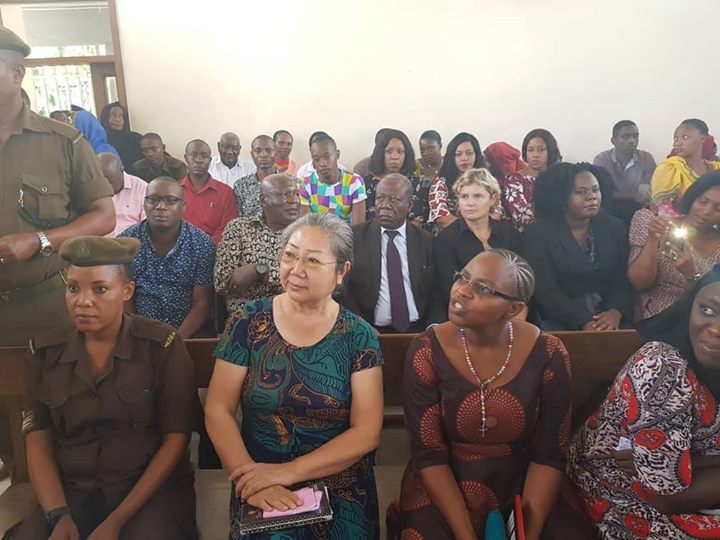 Yang Feng Glan in the Kisutu Court (Photo: Pams Foundation)Posting from the courtroom, wildlife conservation NGO the PAMS Foundation, said that on top of the sentencing the magistrate also ordered Yang and her two Tanzanian accomplices Salvius Matembo and Philemon Manase to either: pay twice the market value of the elephant tusks or face another two years in prison.

Court documents say Yang “intentionally did organize, manage and finance a criminal racket by collecting, transporting or exporting and selling government trophies” weighing a total of 1.889 tonnes from 860 pieces of ivory, despite all three having denied the charges since their arrest in October 2015. The operation lasted between January 2000 and May 2014.

In late 2017, director and co-founder of the PAMS Foundation Wayne Lotter was murdered by two men who stopped his taxi while he was heading to a hotel from the airport, and stole his laptop.

PAMS funds and supports Tanzania’s elite anti-poaching National and Transnational Serious Crimes Investigation Unit, which was responsible for for the arrest of Yang Feng Glan in 2015.

According to Reuters, Yang has lived in Tanzania since the 1970s, speaks Swahili and owns a popular Chinese restaurant there.

On Wednesday, China condemned Yang and her trade. “We do not shield the illegal activities of Chinese citizens, and support the relevant Tanzanian authority’s just investigation of and trying of this case in accordance with the law,” said Foreign Ministry Spokesperson Geng Shuang.

He added that China took the the protection of endangered wild fauna and flora seriously and had been fulfilling international obligations under the Convention on International Trade in Endangered Species of Wild Fauna and Flora (CITES).

Since 2015, China has placed a total ban on the ivory trade, but Hong Kong remains a major transit point for smugglers.

The illegal wildlife trade is the fourth most lucrative criminal trade and estimated to be worth at least US$ 19 billion per year, according to the PAMS Foundation.