A businessman bribed Russian authorities to drop an investigation into a US$150 million kickback scheme involving the Russian military, US prosecutors claimed on Friday. 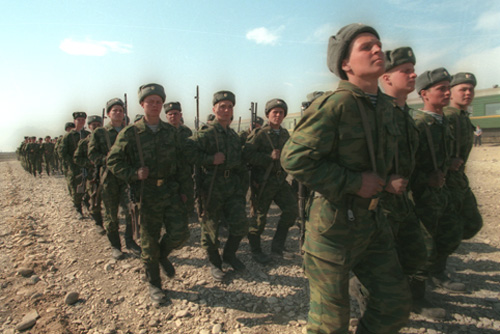 Leonid Teyf defrauded the Russian military (Photo: kremlin.ru)Leonid Teyf, a Russian national, is on trial in the US on charges of money laundering, bribing an American public official and planning a “murder-for-hire” scheme targeting a man suspected of having an affair with his wife.

The allegations of money laundering date back to his time as deputy director of Voentorg, a Russian company contracted to provide goods and services to the Russian military. He used his position to extract $150 million in kickbacks from the subcontractors that provided many of the services.

Prosecutors claim Teyf and five co-conspirators, including his wife Tatyana Teyf, transferred more than $39.5 million into four US bank accounts after they left Russia in 2010. The money came via nearly 300 transfers involving “foreign corporations and bank accounts in countries commonly known to be used for money laundering,” according to the Department of Justice news release.

Although Russian authorities probed Teyf’s alleged kickback scheme, he "bribed Russian officials to drop this investigation," according to US prosecutors.

The FBI raided Teyf’s $5 million home in North Carolina on Dec. 5 after he allegedly paid $25,000 to kill his former housekeeper’s son, who he believed was having an affair with his wife. Investigators say he supplied the hitman with a gun to commit the murder.

Originally, the agents said Teyf had planned to have the man deported, paying an undercover official $10,000 to do so. He allegedly grew frustrated when the process took too long.

Novaya Gazeta, an OCCRP partner organization in Russia, reported last month that Teyf is closely linked to Yevgeny Prigozhin, “Putin’s chef” and one of 13 Russians indicted last February as part of Robert Mueller’s investigation into Russian interference in the 2016 US elections.

Teyf faces up to 20 years in prison if convicted of bribery, firearm possession and murder-for-hire charges. His wife and several others have also been charged.