Imprisoned Azerbaijani blogger and photographer Mehman Huseynov, whose most recent work was about President Ilham Aliyev naming his wife as the country’s vice president, was in deteriorating health Tuesday, 13 days after going on a hunger strike. 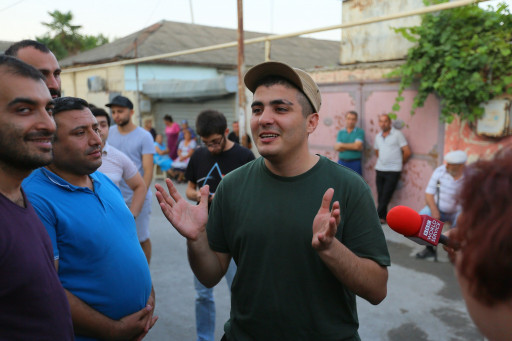 Azerbaijani blogger and photographer Mehman Huseynov. (Photo: Aziz Karimov) Huseynov is an administrator of the Facebook page “Sancaq” (The Pin), which has attracted more than 335,000 followers for its posts about Azerbaijan’s social problems and the property holdings and other luxury trappings enjoyed by the nation’s government officials. Huseynov was arrested March 3, 2017, a day after publishing a video in which he asked fellow Azeris if they would name their spouses as their second-in-command, as Aliyev did.

The blogger had been slated for release this coming March, but last month, authorities filed fresh charges that could keep him in prison for another seven years.

"I will not stop the strike,” Huseynov said in a statement released on his attorney’s Facebook page Saturday. “Sacrificing our freedom is not enough, we have to sacrifice our lives. I’m ready for that. I think my death could shape our society and trigger strong and immediate reactions from international organizations and governments. In this way, I can protect others from the actions taken against me.” 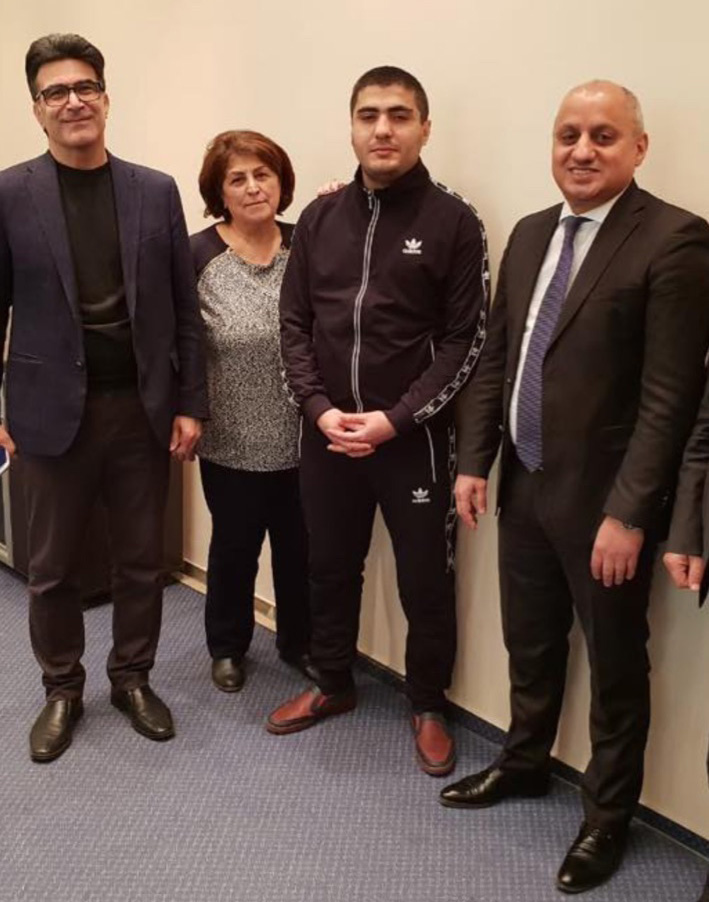 Mehman Huseynov (second from right) pictured with visitors Tuesday. (Photo: Radio Free Europe/Radio Liberty)The initial charges against Huseynov, dubbed “bogus” by the Washington Post editorial board in a Jan. 5 op-ed, alleged that he falsely accused a police officer of inflicting torture and engaging in inhumane and degrading treatment. The Nasimi District Court found the 26-year-old guilty and sentenced him to two years in prison.

Independent human rights organizations view Azerbaijan as one of the world’s most repressive countries, and its judicial system is not seen as independent of the powerful executive.

With his release imminent this coming March, authorities initiated new charges accusing Huseynov of "resisting a representative of the authorities with the use of violence dangerous to [the representative's] health and life.”

Attorney Shahla Humbatova said her client has become weak. Prison authorities, meanwhile, have denied that Huseynov is on a hunger strike at all.

According to a news release issued by a division of Azerbaijan’s Commission for Human Rights, ombudsmen visited Huseynov yesterday and reported that he was accepting water and food.

"In the presence of the head of the National Preventive Group and a doctor, Azerbaijani blogger Mehman Huseynov, held in the facility, was also received in private,” the ombudsman’s office said. “His appeal was heard, his health and situation with food intake [was] checked in the presence of the doctor. It was established that Mehman Huseynov eats, receives parcels, he is under the daily supervision of a doctor and feels well.”

Huseynov’s hunger strike in Baku has sparked protests demanding his freedom, as well as a social media campaign under the moniker #freemehman. Seven protesters have been arrested over the last 25 days, and seven supporters have joined the blogger’s hunger strike in solidarity.

Leyla Babayeva is among them.

Huseynov’s plight has also attracted support from members of the Parliamentary Assembly of the Council of Europe, Human Rights Watch, and US Sen. Marco Rubio, a Republican from Florida.

Mr. Huseynov on 26 December because they lack credibility,”  Mijatović said. “I also underscored that the authorities are under the obligation to provide the necessary medical care to Mr. Huseynov, whose conditions are extremely worrying.”

The commissioner also urged Azeri officials to transfer Huseynov to a civilian hospital for medical care.