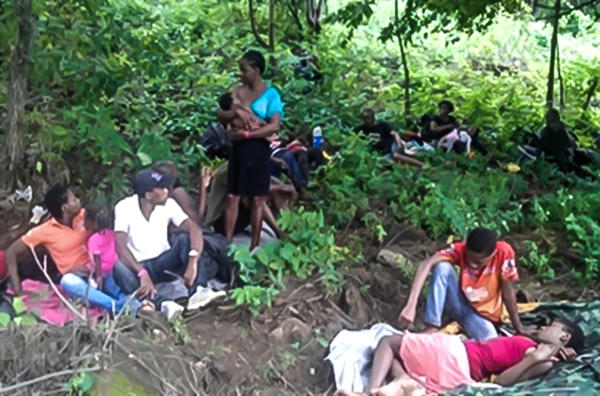 Police in Nicaragua rescued African and Haitian migrants left behind in the mountains by smugglers. (From: Interpol)Police forces checked nearly 44,000 people at air, land and sea borders targeting the criminal networks behind smuggling routes.

Colombian authorities initiated the operation during an Interpol meeting in February after they had gathered evidence of an organized crime network that smuggled people from South Asia through the Americas and into the United States.

Nicaraguan police rescued 22 African and Haitian migrants, including infants, who had been left to their fate in the mountains by smugglers, or “coyotes.”

Marine police patrolling the coast of Nicaragua intercepted a speedboat carrying 21 migrants and two Nicaraguan smugglers. The boat was travelling from Costa Rica to Nicaragua’s south coast and the migrants said they had paid up to $300 for the five-hour trip.

“Migrants from India, Nepal and Bangladesh reported paying between $15,000 and 30,000 per journey, with many having sold their homes to finance their passage,” the Interpol press release said.

Chile uncovered migrants posing as crew members of a shipping company in order to obtain temporary visas and a group of Bangladeshi migrants carrying false working papers and ship documentation provided by smugglers.

In the Dominican Republic, authorities rescued 30 potential victims of sexual exploitation who had been lured from Venezuela on promises of high earnings, only to have their passports confiscated upon arrival.

A man was arrested in El Salvador for possession of child sexual abuse material and connections to an international group that exchanged such images.

“With another 13 investigations opened across the region, what we are seeing is just the tip of the iceberg,” said Interpol Secretary General Jürgen Stock. “As a direct result of Operation Andes, we are confident the results will grow in the coming months, striking a blow to the criminal structures who seek to profit from the vulnerabilities of others.”