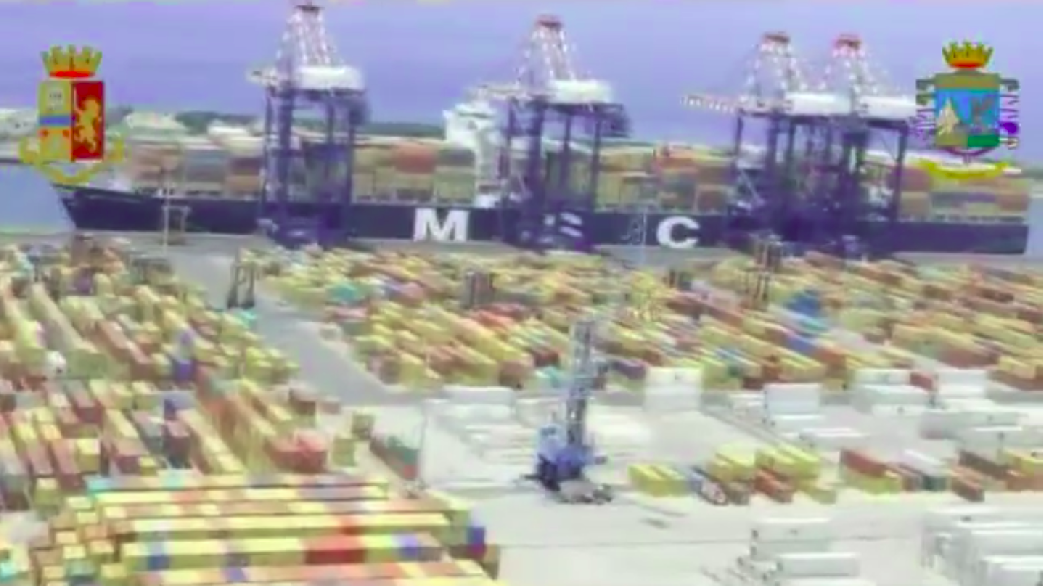 Police footage of one of the ports where the crime group was active (Italian State Police).The international operation was coordinated by Eurojust — the EU’s agency dealing with judicial cooperation among member states. The agency coordinated police forces across Europe to bring down members of the ‘Ndrine — a term used to designate an ‘Ndrangheta clan — from Locride in Calabria, Italian State Police said.

The clan has associates across the world that play key roles in a billions of dollars drug trafficking network.

“In the early hours, almost 90 european and domestic arrest warrants were executed against people who were part of this criminal group following an operation that lasted for more than two years,” said Eurojust Vice President Filippo Spiezia during a press conference.

Dutch prosecutors said that the suspects arrested in the Netherlands were using restaurants and ice cream parlors to cover up their drug trafficking activities and launder their proceeds.

“Operation Pollino was started by looking into money laundering through two restaurants in the south of the Netherlands and it became clear they played an important role in drug trafficking and fraud,” said Bert Langerak, director of the Dutch Fiscal Information and Investigation Service (FIOD). “The restaurant turned out to be where the Italian mafia members met each other. They often stayed in West Germany but were active in Calabria.”

The FIOD then contacted Italian and German colleagues, initiating the worldwide operation.

Besides seizing 140 kilograms of XTC pills and 300 kilograms of cocaine, Dutch authorities also performed a search in Suriname, a former Dutch colony in South America.

Of the 90 arrests, 70 were Italian nationals. The action on Wednesday is only the beginning of a takedown of this enormous network, prosecutors said.

“Certainly, we have not defeated the complete ‘Ndrangheta which is very powerful and rich,” said Federico Cafiero De Raho, Italy’s national anti-mafia and antiterrorism prosecutor. “They do not have to pay in advance when cocaine arrives but only after they distribute it, because Colombian and Mexican organizations see the ‘Ndrangheta as an organization of the same level.”

The Italian crime group has permanent contacts in some of Europe’s biggest ports such as Antwerp and Rotterdam.

“They work for the ‘Ndrangheta and make it easier for them to take drugs from the containers and sort it,” De Raho said.

“I can confirm that this is just a first step,” he added. “The ‘Ndrangheta has important ramifications not only in Italy but also abroad. So 70 arrests is nothing for the ‘Ndrangheta; thousands should be arrested and billions should be seized.”