Uruguay rejected an asylum request on Monday by Peru’s former president Alan Garcia, who is being investigated in Peru for suspected bribery related to the massive Odebrecht corruption scandal that has rattled many South American countries, Reuters reported. 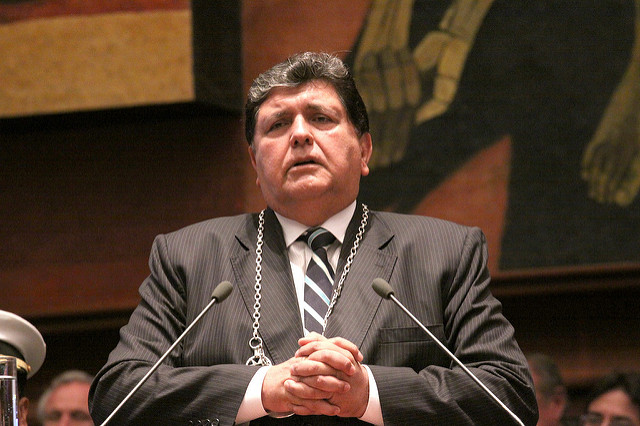 Alan Garcia, former President of Peru (Photo: Hugo Ortiz Ron, CC BY-SA 2.0)President Tabare Vazquez of Uruguay told reporters that Garcia, who had been staying in Uruguay’s embassy in the Peruvian capital of Lima for about two weeks, had left the premises.

According to Bloomberg, Vazquez cited the investigation in denying asylum. “In Peru, the three pillars of the state function autonomously and freely, especially the judiciary, which is investigating possible economic crimes of Peru’s ex-president,” he said.

Garcia had sought asylum after a judge ordered him not to leave Peru for 18 months while authorities investigate allegations that he had taken bribes during the building of an electric train in Lima by the Brazilian conglomerate Odebrecht.

Odebrecht, whose companies provide engineering and construction services as well as manufacturing chemicals and petrochemicals, is accused of bribing officials in dozens of countries to secure lucrative government contracts.

Garcia went to the Uruguayan embassy on Nov. 17, and had stayed until Monday. He is currently staying at one of his properties in Lima, Reuters reported.

He has denied wrongdoing and claims the investigation is part of a political campaign against him. Garcia served as Peru’s president from 1985 to 1990 and again from 2006 to 2011.

“There is no proof that connects me with any crime, and even less to Odebrecht or any of its projects,” Garcia said. He has vowed to work with the authorities, according to Reuters.

In response to Garcia’s claim of  political persecution, Peruvian President Martin Vizcarra said on Twitter, “There is no political persecution in Peru, and all Peruvians must actively work towards justice, without exception. I reaffirm our commitment to the unrestricted respect of the division of powers, the Constitution and the international treaties.”

Jose Ugaz, the former chairman of Transparency International and former prosecutor that led the criminal investigation of former President Alberto Fujimori, said, according to Voice of America, that Uruguay’s denial of asylum could solidify the rule of law in Peru.

"This is a big blow to impunity and corruption," Ugaz said. On Twitter he called it an important step against those accused of corruption and those who are alleging political persecution.