Six people were killed and at least five wounded when anti-corruption protesters clashed with police on Sunday over the lack of a trial for the alleged misuse of US$3.8 billion in public funds Haiti received from Venezuela, Al Jazeera reported. 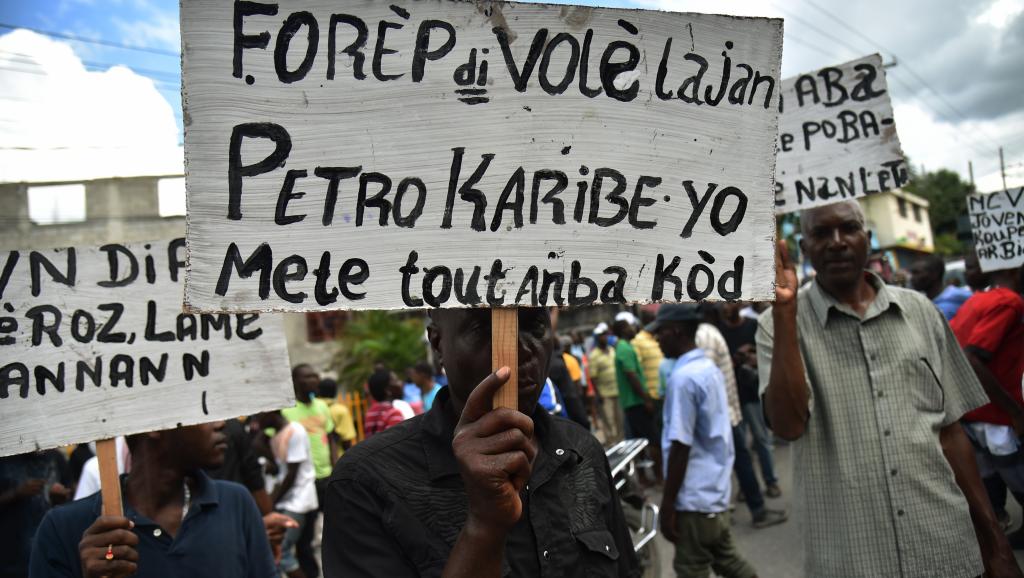 Demonstrators hold up signs about the plundering of the Petrocaribe funds on August 19, 2018 (MedyaLokal, CC BY-SA 4.0)Thousands clashed with police after they piled tires and set them on fire. Police said they deployed more than 3,000 officers across the country and arrested dozens of protesters. Most of the fighting happened in San Marcos, northeast of capital Port-au-Prince.

Haitians want to see changes in the current government, which includes many officials accused of corruption.

"The Haitians are tired of the system,” said protester Samuel Louis. “They want the system to change, and reverse, and for the benefit of the community.”

Marching through the capital and other parts of the country, the public demanded further investigation into how Haiti spent billions from the Petrocaribe oil assistance agreement.

The outbursts of anger started after an August report compiled by the Haitian Senate called for charges to be brought against two former prime ministers and several other government officials for the alleged embezzlement.

It has been one month since two protesters died while demonstrating against the same corruption scandal. Those protests resulted in the firing of chief officials and over a dozen of government advisers.

However, nobody has been charged yet.

Venezuela offered discounted crude oil to countries in the Caribbean and Central America. The Haitian government used the fund to give below-market financing for oil to suppliers, which significantly helped rebuild Haiti after the 2010 earthquake that shattered the country.

Haitian President Jovenel Moise appealed for talks to the opposition that is demanding his resignation over the alleged corruption. He said his administration would probe into the allegations and will hold those responsible accountable.

Marching with banners that ask “Where is the Petrocaribe money?” protestors repeated their frustration with the lack of judicial consequences.

"We ask for the Petrocaribe trial," said a protester. "Second, the departure of accused Jovenel Moise."