Police: At Least 2 Dead in Anti-Corruption Protests in Haiti

At least two people were killed and dozens were injured as anti-corruption protesters numbering in the thousands surged through the streets of the Haitian capital of Port-au-Prince this week, the Associated Press reported. 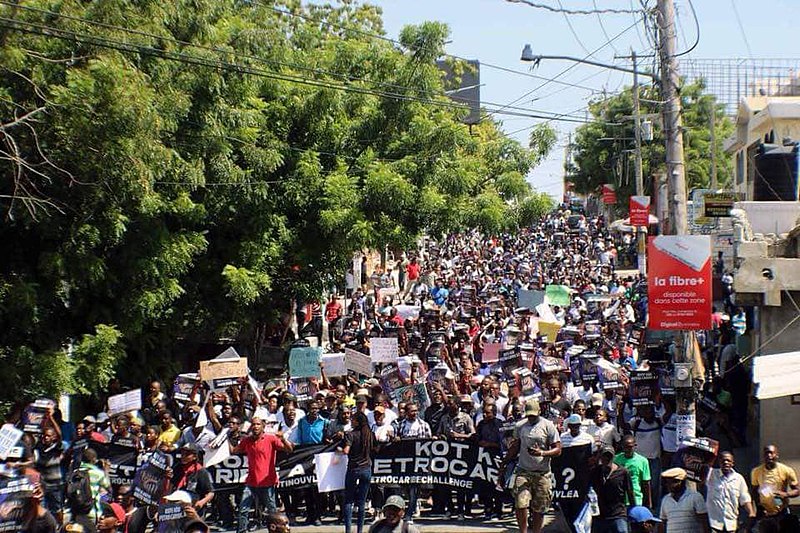 Haitians remain outraged by a report compiled by the Haitian Senate in August that called for charges to be brought against two former prime ministers and several other government officials for alleged embezzlement of US$3.8 billion, abuse of power and forgery in connection with a Venezuelan oil loan program.

PetroCaribe, a Venezuelan-led oil alliance between the South American nation and Caribbean countries, was funneling money directly into Haitian government coffers. Haiti joined the program in 2006, allowing it to pay lower prices for Venezuelan oil, some of it financed upfront, with the funds directed to social and economic projects.

But the Haitian Senate’s report follows up parliamentary investigation into whether the PetroCaribe funds were then misspent by previous administrations.

The protests were kicked off by a photo tweeted by Haitian filmmaker and writer Gilbert Mirambeau Jr. showing him blindfolded and holding a cardboard sign reading “Where is the PetroCaribe money?” in Creole.

The social media campaign, called the #petrocaribechallenge, has spread like wildfire throughout Haiti, one of the poorest nations in the world.

“We are fed up with what’s going on,” said Mirambeau, 35. “It’s like we have a knife under our throats, and are looking at the government and not doing anything.”

Some marchers were heard calling for the resignation of President Jovenel Moise, who took office in February 2017 and whom many accuse of thwarting the PetroCaribe investigation.

Moise reasserted his commitment to investigating the alleged embezzlement in a Thursday tweet, saying “No one will escape justice. It is a moral duty and a righteousness.”

October 17 - the day of the protests - is a national holiday in Haiti commemorating the assassination of Jean-Jacques Dessalines, one of nation’s founding fathers and its first ruler after a slave-led rebellion overthrew French colonial rule in 1804.

A stone was thrown at or near Moise as he lay a wreath on a monument of the independence leader at an event held on Wednesday in the northern town of Marchand Dessalines, home to five historic forts that once defended the city both during and after the slave rebellion.

Moise himself was unharmed, but a presidential guard was injured, Diario Libre reported.