The former top prosecutor of Shanghai who was sentenced last month to life imprisonment for a US$10 million bribery scheme has implicated some 100 officials linked to his corruption case, an anonymous source told the South China Morning Post this week. 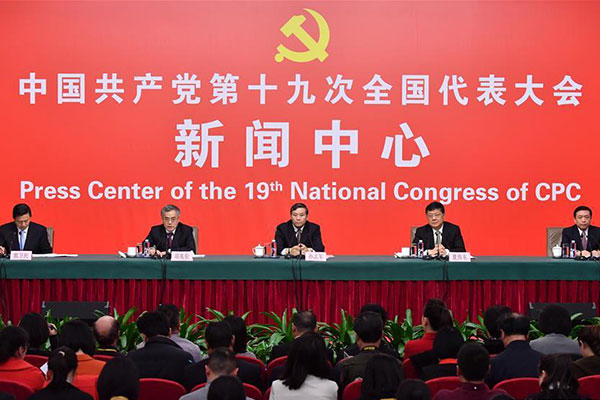 The press center of the 19th National Congress of the Communist Party of China, Oct 20, 2017 (Photo: The State Council of the People's Republic of China)A court in the southern city of Nanning handed out a life sentence on October 25 to Chen Xu, a former Communist Party chief and procurator general once known as the “law manipulator of Shanghai.”

He was found guilty of accepting money and property worth more than $10.68 million in personal gifts or through family members from 2000 to 2015, according to prosecutors. Chen also used his government positions to orchestrate favorable contracts and help his beneficiaries dodge prosecution.

But critics argue that Chen’s bribery conviction has not allowed the court to prosecute him for exploiting his position. The anonymous source told the Post that it is extremely difficult to investigate officials like Chen who are themselves familiar with China’s legal system, as they “cover their trails way better” than others.

People close to Chen described him as “very well-connected” and “able to get things done,” but others referred to him as a “wheeler-dealer,” according to the Post.

Chen confessed to his crimes, relinquished his assets, and expressed remorse in court, resulting in a “lighter punishment,” according to China Daily.

The Communist Party expelled Chen in May 2017, finding he had “seriously damaged the credibility of the judiciary and social justice,” according to the Party website. He had served in Shanghai’s judiciary since the 1970’s and as top prosecutor of Shanghai since February 2008.

The Central Commission for Discipline Inspection (CCDI), the Party’s internal watchdog, conducted an investigation into Chen at the request of Party’s Central Committee. In addition to allowing others to pay for him to play golf and other serious allegations of bribery and abuse of power, the CCDI accused Chen of engaging in “superstitious activities,” which violates the Party’s code of atheism.

Two other former officials were prosecuted for bribery at the same time as Chen, part of a widespread crackdown on corruption under President Xi Jinping that has punished more than 1.5 million corrupt Communist Party officials as of February 2018, according to NBC News. Wei Minzhou of Shaanxi Province pleaded guilty to accepting bribes of $15.7 million and Liu Shanqiao of Hubei Province was sentenced to 12 years in prison for bribes totaling $2.56 million.