Philippine president Rodrigo Duterte temporarily placed the Bureau of Customs under military control after two massive shipments of illegal drugs each valued at over US$100 million evaded detection in the port of Manila, the Associated Press reported. 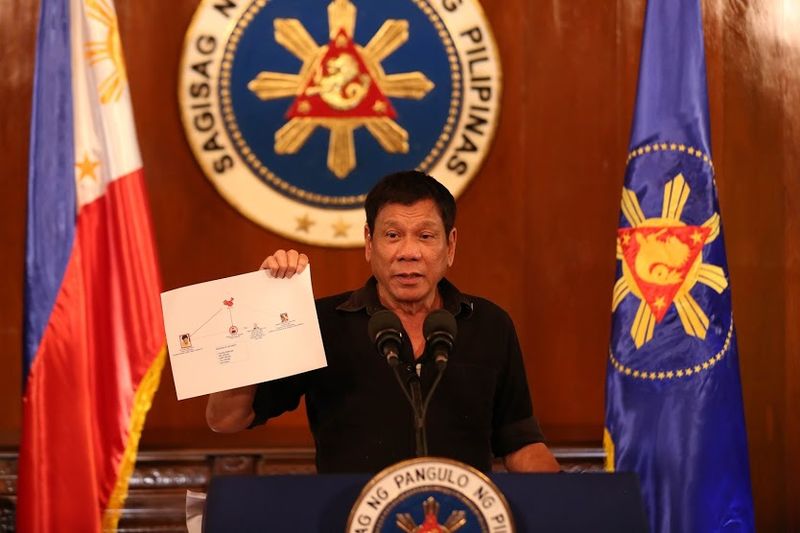 President Rodrigo Duterte presents a chart illustrating a drug trade network during a July 2016 press conference (Photo: Wikipedia)Congress is currently investigating how the shipments of suspected methamphetamine - declared at Customs as kitchenware and magnetic lifters - slipped through, one last year and the other this July.

The methamphetamine, also known as shabu, from the 2017 shipment - worth an estimated $125.4 million - was later traced to a warehouse in Valenzuela, in metropolitan Manila. July’s one tonne shipment valued at $127 million was later found in Cavite province.

The President announced the move late Sunday night in a speech given at the 48th birthday celebration of former Foreign Affairs Secretary Alan Peter Cayetano at a hotel in the southern city of Davao.

In attendance at the dinner was China’s highest-ranking diplomat, State Councilor and Foreign Minister Wang Yi, who spoke fondly of Cayetano, calling him “my good friend.”

Duterte’s rambling, nearly hour-and-a-half long speech on Sunday at the banquet hall in Davao’s Marco Polo Hotel was riddled with expletives, and at one point he made a rude finger gesture.

“Part of the lawless elements are there inside the Bureau of Customs,” Duterte said. “With this kind of game that they are playing, dirty games, I am forced now to ask the armed forces to take over.”

The Bureau of Customs, which employs more than 3,000 officials nationwide, will be put on a “floating status” and be required to conduct their operations under close supervision in a gymnasium in the presidential palace complex.

The President also fired two of his most trusted appointees for failing to halt the drug shipments. Both men have denied any involvement and have promised to cooperate with the congressional investigation.

Duterte’s critics see Sunday’s decision as yet another progression in the President’s now two-year-long “drug war” that has resulted in the killing of more than 12,000 drug suspects and stunned international human rights watchdogs.

“Do not listen to the human rights (groups). They cannot help us when we go down the drain, don’t believe them because it’s not true,” Duterte said.