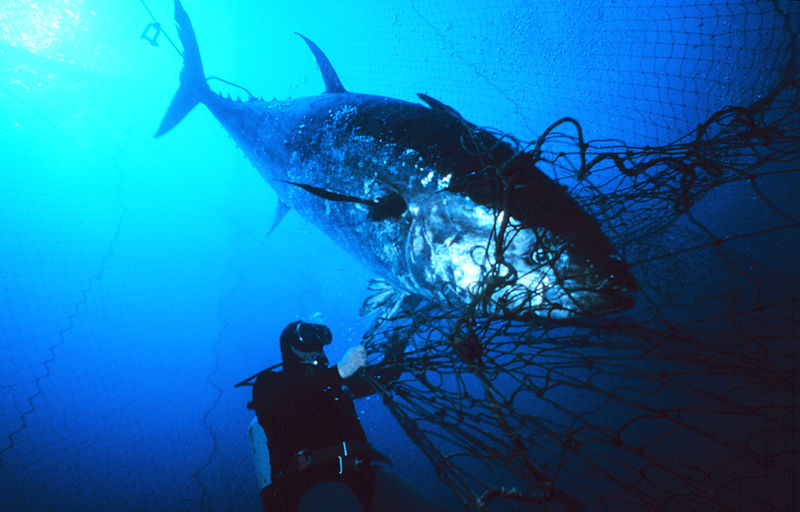 An Atlantic bluefin tuna weighing 270 kg caught off the coast of Sicily, 1998 (Photo: NOAA)Europol coordinated with the Spanish Civil Guard and other European authorities in a sting known as Operation Tarantelo, seizing more than 80,000 kg of illicit Bluefin tuna. The Civil Guard carried out 25 searches and in addition to the tuna confiscated US$576,000 in cash and seven luxury vehicles. Authorities in Italy and Portugal conducted numerous inspections and identified dozens of suspects in their respective countries.

Traffickers earn at least $5.7 (€5) per kg of tuna, amounting to an annual profit of $14.4 million – twice the annual volume of the legal Bluefin tuna trade, estimated at 1.25 million kg, Europol said.

In addition to its environmental impact, illegal and unregulated fishing poses a severe risk to consumer health. Illegally-harvested fish can easily spoil, as catches are often hidden underwater while awaiting transport. Improperly stored tuna can lead to outbreaks of food poisoning.

The Operation came ahead of the upcoming meeting of the International Commission for the Conservation of Atlantic Tunas (ICCT), to be held in Croatia in November, where fishing nations and the EU will agree on new measures to manage Bluefin tuna fishing practices in the east Atlantic and Mediterranean.

Operation Tarantelo involved a large network of fishing companies and distributors, including one of Europe’s biggest seafood farms, the Spanish Ricardo Fuentes and Sons Group, according to the World Wildlife Fund (WWF).

“This level of black fish and black money occurring on the European market in 2018 contravenes the leadership role that the EU is taking in the global fight against illegal fishing,” Samantha Burgess, the head of Marine Policy at WWF’s European Policy Office, said.

“It's simply unacceptable that such a massive trade of illegal bluefin tuna involving European companies and worth millions of euros has managed to escape the controls of governments and most especially the EU institutions,” WWF’s Bluefin Tuna Regional Manager, Alessandro Buzzi, added.

The Maltese Independent conducted an investigation last year that alleged some 5,000 kg of Bluefin tuna were being smuggled into Malta each week for distribution to EU states such as Germany, the Netherlands, the UK and France.

This month’s investigation began after the Civil Guard noticed irregularities in fish catches in the Mediterranean Sea. They learned the fish were being caught in Italian and Maltese waters, imported via French harbors, and then traded illegally in Spain.

The Maltese-caught fish were imported with legal fishing documents from authorized fish farms, but the Italian fish arrived in Spain without any documents or inspections. Fish were also caught illegally in Spain and transported in false bottoms under ship decks.