US: $10 million For Info on Cartel Boss Who “Takes Over Cities”

The US is offering US$10 million for information on “El Mencho,” the alleged leader of a Mexican drug gang that has replaced the infamous Sinaloa Cartel as the country’s largest and most violent drug-traffickers. 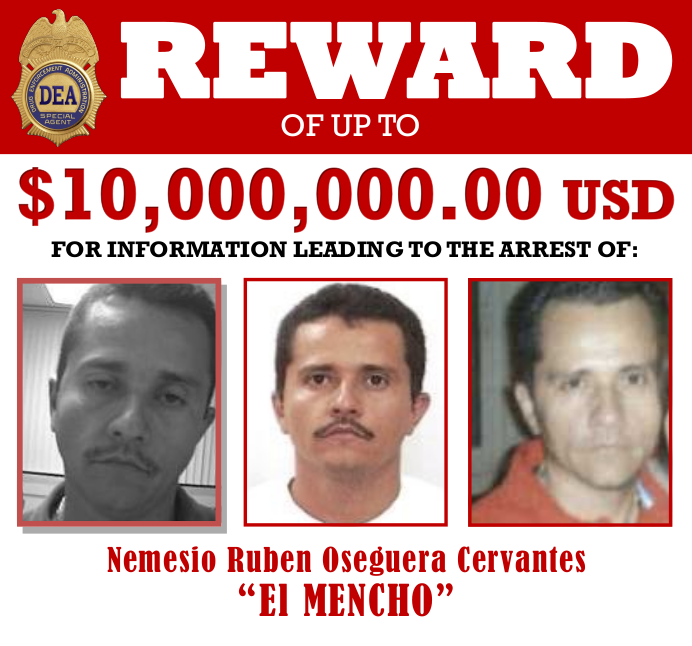 Reward Poster for "El Mencho" (From: DEA) "His gang will basically take over an entire city,” said Daniel Comeaux of the Los Angeles Drug Enforcement Agency. “He'll take kids and make them work for him by force. He will tell the mothers and fathers if they don't work, they die.”

The US Department of Justice announced on Tuesday a series of indictments, designations, a citizen tip-line, and million-dollar rewards targeting the Cartel Jalisco Nueva Generacion, “one of the largest, most dangerous drug cartels currently operating in Mexico.”

The cartel is led by Nemesio Oseguera Cervantes, aka “El Mencho.” The rewards also include $5 million set aside for tips on Erick Valencia Salazar, aka, “El 85,” a high ranking member of the cartel.

Making it to the top five of most dangerous transnational criminal organizations in the world, the cartel is “responsible for trafficking many tons of cocaine, methamphetamine and fentanyl-laced heroin into the United States, as well as for violence and significant loss of life in Mexico.”

Since its inception in 2011, the cartel has expanded not only in the US and Mexico but also throughout Asia, Australia and Europe.

“We will continue to hammer transnational criminal organizations like the Cartel de San Jalisco Nueva Generacion, or CJNG,” said Attorney General Jeff Sessions. “The DEA has said for three years in a row that Mexican drug cartels are the single gravest drug threat that this country faces. President Trump recognizes this, and the day I was sworn in as Attorney General, he ordered me to dismantle transnational criminal organizations, including the cartels.”

Listed among the 15 indictments are cartel leaders as well as financiers, drug suppliers and transporters.