A Nigerian man whose email scams aimed to defraud businesspeople from Singapore to Switzerland out of millions of dollars was sentenced to five years in a US federal prison on Tuesday. 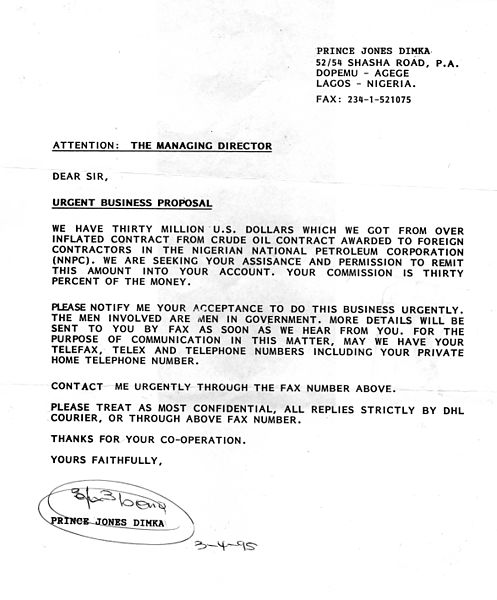 A 1995 scam letter from Nigeria (CC 3.0)“Onyekachi Opara attempted to dupe thousands of victims into transferring money to him and his co-defendant in a phony email scheme,” said Geoffrey Berman, US Attorney for the Southern District of New York.

Opara, 29, and a partner were arrested in South Africa in December 2016 and extradited to the US from Johannesburg in January of this year.

According to the New York FBI’s Complex Frauds and Cybercrimes Unit, he allegedly cooked up business email scams that targeted thousands of companies worldwide.

In these scams, Opara and fellow conspirators pretended to be supervisors at the target companies or third-party vendors, and emailed company employees requesting payments or information.

The emails, however, were sent from accounts with domain names very similar to those of the companies or vendors, or accounts whose metadata had been changed so it seemed like the emails were coming from a familiar address.

Once victims transferred funds, investigators say Opara quickly sucked them away to other bank accounts controlled by him and his partners. Investigators estimate that he attempted to steal $25 million in this way.

Striking up relationships with men online, “Barbara” would convince them to send money overseas to accounts Opara controlled.

One victim transferred $600,000 to “Barbara”--money which landed in the bank accounts of Opara’s co-conspirators.

In addition to his five-year sentence, Opara has been ordered to pay $2.5 million in restitution.

“The global reach of our office and the FBI ensured that Opara will serve time in the United States for his crimes,” said Berman.