In the wake of the fire that immolated Brazil’s oldest and most important scientific museum, Brazilians are blaming neglect, corruption, and lavish World Cup spending for the destruction of a collection of 20 million artifacts. 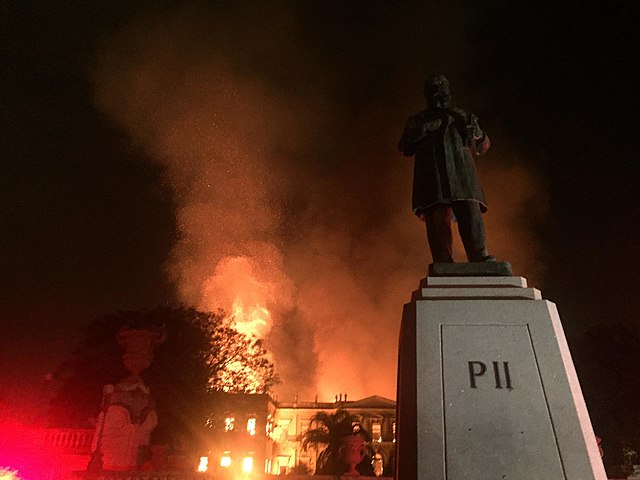 Fire at the National Museum of Brazil (CC 4.0)“Brazil has made a priority of soccer arenas instead of museums. Now, a country without its past, without present.... and without future,” wrote journalist Rafael Fontana on Twitter.

“The money spent on each one of those stadiums — a quarter of that would have been enough to make this museum safe and resplendent,” Luiz Fernando Dias Duarte, the museum’s deputy director, was quoted saying to media, referring to Brazil’s multibillion dollar World Cup transformation.

But while Brazil’s money found its way to football stadiums and millions of dollars in bribes, the museum’s budget fell and fell. It dropped two thirds, to about US$155,270 between 2013 and 2017. This year, the museum received just $23,700, Reuters reports.

And the problems continued. Duarte said he knew the building was vulnerable and unsafe, so much so that he unplugged everything in his office before leaving at night.

The fire began after the museum closed on Sunday, and was controlled by three in the morning, reports Brazil’s Globo News TV station.

Its cause is unknown, but its effects are clear: the building, with its pastel facade, was gutted. Fossils, paintings, and a trove of indigenous artifacts were lost. A fragment of meteorite remained.

“The catastrophe that still reaches the National museum this Sunday is equivalent to a lobotomy in Brazilian memory,” wrote Marina Silva, a 2018 presidential candidate, on Twitter.

“Unfortunately, given the financial shortage of UFRJ and the other public universities in the last three years, this was an announced tragedy.”