The Serbian Center for Investigative Journalism, CINS, will be considering its legal options regarding accusations made by the President of the Serb-controlled half of Bosnia who accused the organization and its editor-in-chief of “destroying regional political structures with money from international organizations.” 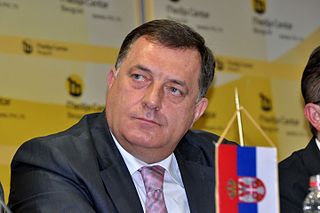 Milorad Dodik by Medija centar Beograd (CC BY-SA 3.0)Milorad Dodik, the President of Republika Srpska - one of the two semi-autonomous regions that comprise Bosnia and Herzegovina - made the accusations at a press conference in Banja Luka on Tuesday after being asked by reporters about a recently published database containing records of properties owned by Bosnian politicians.

However, the records were published by the Center for Investigative Journalism in Bosnia, not Serbia. Dodik’s file in that database shows 13 items owned by him and his family members, including four apartments, two houses, and a total of some 260,000 square meters of land.

Dodik erroneously claimed that the editor-in-chief of Serbia’s CINS, Dino Jahic, was orchestrating the work of Bosnia’s CIN.

He then went on to say that CINS was using money allocated for the destruction of political structures in the region, putting the publishing of the database in context with the October election and the theme of his Tuesday press conference: his claim that the United States were meddling in Bosnia’s internal affairs by pouring money into dubious projects under the guise of fight against corruption.

“Dodik did not provide a single piece of evidence for his statement,” CINS said in a statement on Wednesday.

By stating incorrect information and putting them in the wrong context, Dodik is “directly jeopardizing the safety of Jahic, other newsroom members, and their families,” the statement said, adding that fabricating stories and harassing people in order “to win cheap political points” was unacceptable.

CINS also expressed support for their colleagues in Sarajevo who are the true authors of the database and said that it is consulting lawyers to determine its next steps which will include informing relevant local and international organizations and institutions.