A week after Philippines President Rodrigo Duterte ordered the firing of an anti-corruption official who was investigating him over millions of dollars of unexplained family wealth, the Philippines’ new ombudsman said the order would be enforced. 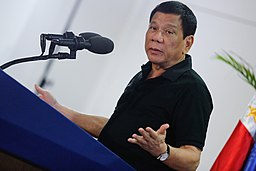 Rodrigo Duterte By TOTO LOZANO/PPDThe dismissal, signed by the executive secretary on August 1, declares that the Philippines’ Overall Deputy Ombudsman Melchor Arthur Carandang is himself liable for “graft and corruption” after he told reporters in a television interview that he had evidence of the president’s alleged ill-gotten pesos.

The dismissal cites a complaint made by two attorneys in October of last year that accuses Carandang of bias and of illegally divulging confidential information.

He “indulged in favoritism, tyrannically abusing his power,” says the executive order.

Opposition lawmaker Antonio Trillanes IV called the move “harassment” and a “cover-up” tactic. Trillanes and others raised the possibility that the dismissal was unconstitutional. In January, the President’s office ordered Carandang’s suspension over the same investigation.

At that time, then-Ombudsman Conchita Carpio-Morales refused to enforce the order, citing a Supreme Court precedent that ruled the president couldn’t fire ombudsmen.

Carpio-Morales stepped down on July 26. Now, new Ombudsman Samuel Matires told reporters on Monday that he had “no choice” but to enforce the order.

President Duterte campaigned on a strident anti-corruption platform, but documents obtained by the Office of the Ombudsman and the Anti Money Laundering Council show billions of pesos worth of unexplained bank transactions flowing through Duterte’s family accounts over the past years.

Trillanes alleges that these billions, which don’t appear in Duterte’s declarations of net worth, come from a plundering scheme involving thousands of ‘ghost employees’ in Davao city.