In a scheme dating back to the 1990s, an ex-cop and his organized network of drug traffickers, strip club owners, and psychics rigged the McDonald’s Monopoly game to win almost every prize for 12 years, stealing over US$ 20 million. 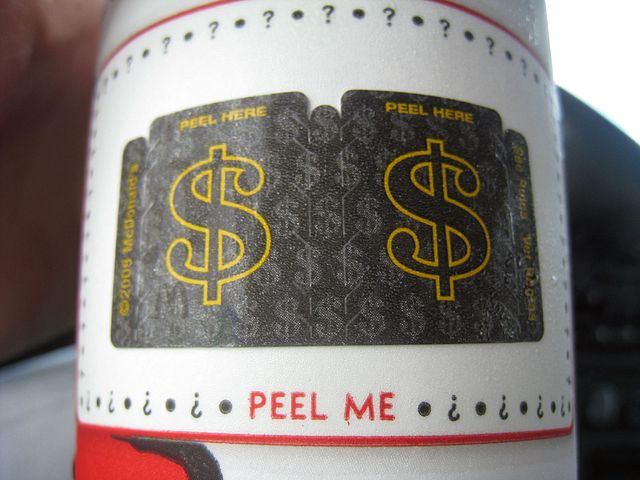 McDonald's monopoly game piecesA wild, in-depth story published by the Daily Beast over the weekend by crime reporter Jeff Maysh has unearthed the full account and reignited interest in the scandal more than a decade after its main player, Jerry Jacobsen, was released from prison.

Launched in 1987, McDonald’s Monopoly game is one of the franchise’s longest-running and most popular marketing promotions. Customers collect Monopoly game pieces attached to McDonalds packaging and by completing properties or finding instant wins, players are rewarded with prizes that range from a free Filet-o-Fish to US$1 million.

Jacobsen, a former police officer, was head of security for the company responsible for running the promotion, Simon Marketing. He oversaw the production of the game pieces and was entrusted with transporting them from the printing plant to the packaging factories.

According to the report, he was initially obsessed with loss prevention.

“He inspected workers’ shoes to check they weren’t stealing McDonald’s game pieces,” the Daily Beast quotes a former colleague as saying. “I couldn’t even go to the bathroom without someone going with me.”

In 1989, though, Jacobsen stole his first sticker worth $25,000 and gave it to his brother-in-law at a family gathering in Miami.

Six years later, the scheme spiraled into a sprawling operation in which Jacobsen would provide people, often recruited through friends and family, with winning pieces in exchange for a cut of the cash.

After a chance meeting at an airport in 1995, Jacobsen partnered with Gennaro Colombo of the Colombo crime family in New York to industrialize his McDonalds Monopoly scam. In total, Jacobsen and his network stole over $24 million in falsely claimed winnings.

In 2000, however, an anonymous tip to the FBI sparked a year-long investigation that culminated in a sting on one of Jacobsen’s phony winners. In total, 52 members of the conspiracy were convicted of mail fraud and conspiracy.

Jacobsen was sentenced to three years in prison and forced to pay back $12.5 million in restitution. According to the Daily Beast, he is currently living a quiet life in Georgia.