Fifteen people, including the CEO of a major pharmaceutical company, have been arrested in China after an investigation showed the company sold 252,600 vaccine doses that failed to meet safety regulations, according to a police statement cited by state media on Tuesday. 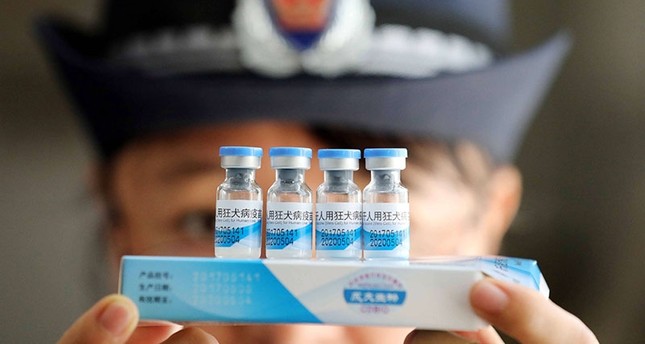 A law enforcement officer checks the vaccine supply in Rongan, China. (EPA Photo)This is the latest update in a series of discoveries over the past month that have renewed China’s decades-long concerns about food and drug safety.

Changsheng Biotechnology — the company under investigation — was first investigated in November 2017 when China’s food and drug authority announced that two batches of diptheria, whooping cough, and tetanus vaccines produced by Changsheng did not meet safety standards, according to South China Morning News. However the public was not informed that these vaccines had been distributed.

The administration said that the vaccines were insufficient but not dangerous.

On July 15, 2018, the company finally entered the spotlight when China’s state drug watchdog discovered evidence of forged data related to 113,000 rabies vaccines. The company’s licence to produce the rabies vaccine was revoked, the product was recalled, and Changsheng was fined 3.4 million yuan (US$502,000) by the Food and Drug Administration.

On July 22, Chinese Premier Li Keqiang ordered an investigation, according to a statement on the government website. Just one day later President XI Jingping called the situation “vile in nature and shocking” on CCTV, according to local media.

The World Health Organization supported the government’s actions in a statement, according to the Associated Press.

“While the current incident is clearly regrettable, the detection of this event by an unannounced inspection shows that the regulatory authority’s system of checks and balances to protect population health is working,” the statement said.

Though there have not been any reports of injury caused by the vaccine, the news has had a major impact on the public, who have seen through multiple vaccination issues over the past decade.

In 2016, police discovered a criminal ring that had sold improperly stored vaccines worth almost US$90 million across China over five years. In 2015, hundreds of children became ill after receiving vaccinations that were past their expiration date. And in 2010, local news reported that four children died after getting unrefrigerated vaccines.

Even beyond vaccinations, the Chengshang scandal has brought a 2008 health crisis back to the public’s memory, during which milk powder killed six infants and left 300,000 others ill.

China has a reputation of trying to cover up these incidents, which only fuels the public’s distrust. The Chengshang scandal, which was discovered eight months ago but not made public until now, is no different.