A worldwide crackdown on illegal wildlife and timber trade has lead to 1,974 seizures of reptiles, birds and other exotic animals and the identification of 1,400 suspects, Interpol said Wednesday. 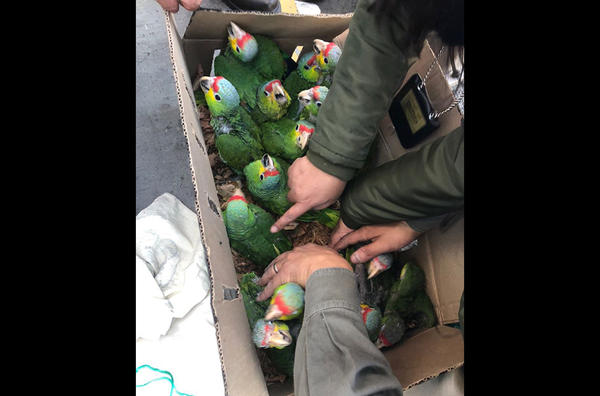 Operation Thunderstorm resulted in the rescue of almost 4,000 birds including these Amazona autumnalis parrots intercepted by Mexican Police authorities (Interpol)“The operation involved police, customs, border, environment, wildlife and forestry agencies from 92 countries and resulted in millions of dollars-worth of seizures,” the agency said.

Several tons of bear, elephant, crocodile, whale and zebra meat as well as tens of thousands of reptiles, tons of ivory, thousands of birds including pelicans and ostriches, dozens of live primates and tigers, lions, leopards and jaguars were seized in Operation Thunderstorm.

In Canada, police intercepted a container with 18 tons of eel meat, thought to be poached in Europe and then reared in Asia before being sold to North America for consumption.

One man was arrested in Israel after posting a hunting photograph on social media, which lead prosecutors to his home where they found fox, jackal and mongoose bodies.

The man is awaiting deportation to Thailand and has also been involved in people smuggling and illegal employment, according to follow-up inquiries.

“By revealing how wildlife trafficking groups use the same routes as criminals involved in other crime areas – often hand in hand with tax evasion, corruption, money laundering and violent crime – Operation Thunderstorm sends a clear message to wildlife criminals that the world’s law enforcement community is homing in on them,” said Interpol Secretary General Jürgen Stock.

Interpol and local police gathered intelligence ahead of the operation to target hotspots such as land and airport border points and wildlife parks.

“Driven by profit, the activities of these groups can have devastating economic, social and environmental impacts,” the statement said.

The international scope of these groups make it hard for local agencies to deal with illegal wildlife trade, according to Ben Janse van Rensburg, CITES Secretariat Chief of Enforcement Support.

“No one country, region or agency can tackle illegal wildlife trade alone. Collective action across source, transit and destination states is essential,” he said.

Senior officer Grant Miller of the UK Border Force, a chair on the Interpol Wildlife Crime Working Group, said the operation was a success and that “organized crime groups engaging in wildlife crime will feel the impact of this operation for a long time.”