Amid a wave of opposing anti-corruption and pro-government protests, Romania’s lower house of parliament approved amendments to the country’s criminal procedure that critics argue would make the country more amenable to high-level corruption, Reuters reported Monday. 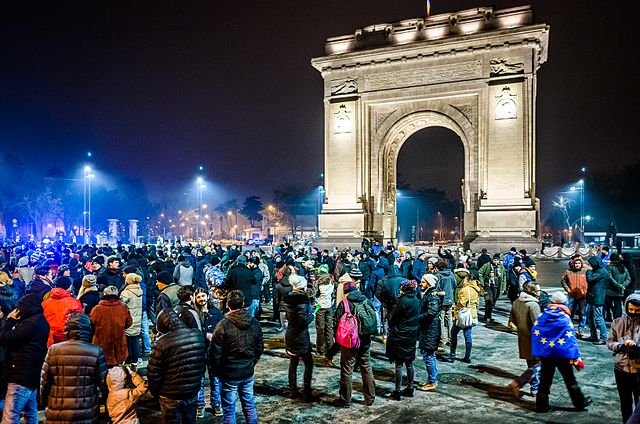 Protesters in Romania (Mihai Petre, CC BY-SA 4.0)Opposition groups say they plan to challenge the new penal handbook designed by the ruling Social Democrats in constitutional court. They argue that the changes would essentially kill the current web of graft cases in the Romanian justice system and weaken the power of prosecutors to fight corruption, the agency said.

The new rules, which were endorsed by legislators in a 175-78 vote, disallow courts of appeal from convicting a person found innocent by a lower court without the introduction of new evidence.

Information provided by whistleblowers would also be discounted if not provided within six months of the alleged misconduct.

Additionally, details of criminal cases would no longer be be made public without establishing legal public interest, and the maximum length for a criminal investigation would be set to one year.

Social Democrat lawmaker Florin Iordache, however, told parliament that the changes are necessary to prevent officials from being unfairly targeted, according to Bloomberg.

“We’re doing this because we want to stop abuses in the judiciary,” Iordache said. “We’ve seen many people doing the ‘perp walk’ and then these people were proven innocent.”

President Klaus Iohannis, who has frequently fallen out with the government, according to Bloomberg, must still sign off on the bill before it takes effect.

Romania is one of the European Union’s most corrupt countries and Brussels keeps its justice system under special monitoring, according to Reuters.

Out of 180 countries, Romania is ranked 59 on Transparency International’s corruption perception index.