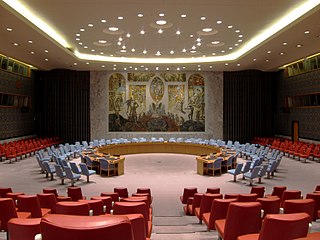 UN Security Council (Neptuul, CC BY-SA 3.0)The move comes after Russia lifted a hold it had set on the proposed action, according to The Washington Post.

In December, the security council condemned the sale of African migrants as a heinous abuse of human rights. Last month, the Netherlands asked the security body to impose a global asset freeze and travel ban on the individuals. Russia delayed the process and requested more information but with the hold now lifted, the sanctions go into effect immediately.

‘’The sanctions are part of a wider approach to tackling human trafficking and people smuggling, which the government intends to step up in line with the coalition agreement,” said Dutch State Secretary for Justice and Security Mark Harbers in a statement.

“Last fall, images of migrants being sold as slaves in Libya shocked our conscience, and the Security Council vowed to take action. Today’s sanctions send a strong message that the international community is united in seeking accountability for perpetrators of human trafficking and smuggling,” U.S. Ambassador to the United Nations Nikki Haley said in a statement.

Under a sanctions system set up in 2011, the Security Council is able to impose a global asset freeze and travel ban on “individuals and entities involved in or complicit in ordering, controlling, or otherwise directing, the commission of serious human rights abuses against persons in Libya.”

These are the first designations of individuals through the Libyan sanctions regime.