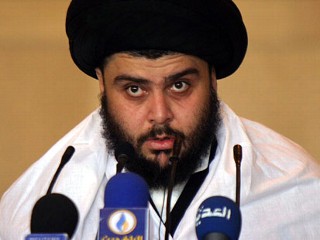 Moqtada-al-Sadr (Photo: Llywelyn2000, CC BY-SA 3.0)“The commission has to act expeditiously in order to seriously address all complaints,” the representative of the United Nations secretary-general for Iraq, Jan Kubis, said in a statement released Thursday, “including, as necessary, the conduct of partial manual recount[s] in selected locations, notably in Kirkuk.”

He said the UN is prepared to provide assistance if requested.

The controversy centers largely around Iraq’s first-time use of electronic voting machines, according to the Washington Post, which led “to instances throughout the country of confusion and voters being turned away for lacking updated voting cards.”

Political parties have also accused their rivals of tampering with the machines. Some candidates claim to have received zero votes in the same polling stations where they cast ballots for themselves, the Wall Street Journal reported, but these reports are not confirmed or widespread.

The fraud allegations have delayed the official tally of Iraq’s first post-ISIS parliamentary election. With approximately 90 percent of ballots counted, a ticket backed by the anti-American Shiite cleric Moqtada al-Sadr has received the most votes.

The election saw less than 45 percent voter participation, the lowest turnout since Iraq became a democracy fifteen years ago. The recounts aren’t expected to affect Saturday’s results, the Wall Street Journal reported, but a complete count is required for the final determination of parliament seats.

According to the partial results, the Patriotic Union of Kurdistan won the most votes in Kirkuk, a city on the border of what Kurds claim to be their territory. This has raised questions among voters in the long-disputed city, where Arab and Turkmen outnumber Kurds.

Hundreds of demonstrators gathered outside the election office in the northern Iraqi city on Wednesday to protest the alleged interference.

Lawmakers on Thursday called for an emergency session of parliament to to discuss the allegations.