Federal prosecutors accused a former mob boss of murdering a witness during the start of a high-profile murder trial in the Boston Federal Court on Wednesday, Reuters reported. The jury was presented with testimonies and narratives that dove into the complex history of New England’s mafia. 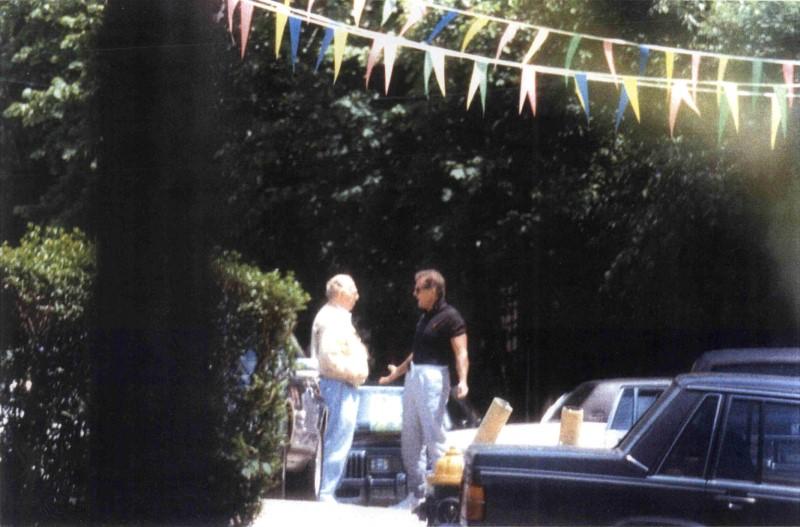 Surveillance foto of Salemme (R) in early '90s (From U.S. Attorney's Office)At the age of 84, Francis “Cadillac Frank” Salemme entered the court in a wheelchair. Salemme’s lawyer Steve Boozang said that while he has been “no angel,” he did not play a role in the 1993 killing of nightclub owner Steve DiSarro.

Boozang said Salemme “grew up in a different era when there were gangland slayings. It was a little bit of kill or be killed back then,” according to the Boston Globe.

The old mobster looked frail as he left his wheelchair to meet his lawyers in a baggy grey suit and with slicked-back thinning grey hair, Calgary Sun reported.

Salemme was a hit man who had made his way up and had become the head of the Patriarca New England crime family by 1990.

Disarro’s wife, Pamela, testified that her late husband had told her the FBI had pulled him over on the highway, told him he was going to be indicted and urged him to cooperate in a case against Salemme and his son.

She said DiSarro refused and “told them where to go basically.”

Disarro was nervous about meeting “the big guy,” meaning boss Salemme, and left a note to his son saying that he might be gone for a while, Wyshak said.

“The Channel was under a microscope, and Frank Salemme wasn’t going to lose it all … so what did he do? He had Steven DiSarro murdered,” Wyshak said, adding that Salemme confessed the murder to Stephen “The Rifleman” Flemmi, an associate of long-time Boston crime lord James “Whitey” Bulger, who is serving life in prison.

Flemmi is expected to testify at the trial and “will tell you Frank Salemme told him they killed Steve DiSarro because they thought he was weak,” Wyshak said in his opening statement.

Before the hit was finished, Flemmi left but said that he was later told by Salemme that they had killed DiSarro.

The defense said Flemmi cannot be trusted and highlighted the fact that he is serving life for 10 murders. They argued that while Salemme confessed to eight murders while cooperating with the FBI, he always denied being behind the murder of DiSarro even though he might have been given a “free pass.”

The eight murders Salemme admitted to being involved in happened in the 1960s and he never mentioned his role in the murders that occurred while he was a boss of the New England mafia.

Together with Bulger and Flemmi, Salemme was indicted in 1995 for racketeering. Bulger went on the run and Flemmi told Salemme that he and Bulger had actually been working with the FBI.

Feeling betrayed by the two, Salemme agreed to testify against them and a corrupt FBI agent.

Salemme was placed under the federal witness protection program for his cooperation and was living in Atlanta under a new identity.

As soon as DiSarro’s body was found in 2016, Salemme took off, Wyshak said. He was arrested in Connecticut with a car full of clothes and US$28,000 in cash.

The lawyer of Paul Weadick, who was allegedly holding DiSarro’s legs during the strangulation, said that his 62-year old client was a plumber from Burlington who had nothing to do with the killing but had been unfairly caught in a case with a “high profile” codefendant.