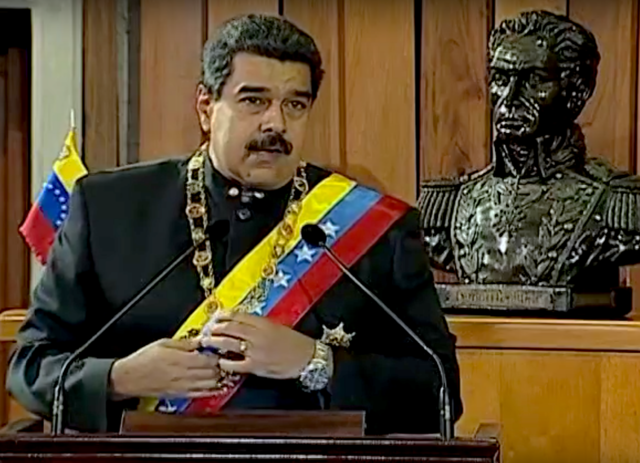 Venezuelan President Nicolas Maduro addressing the Supreme Tribunal of Justice in 2017 (Source: Government of Venezuela, CC BY 3.0)Officials from 16 nations met with the U.S. Treasury Secretary and another U.S. government official in a meeting that resulted in an agreement to cooperate regionally to seize assets obtained through corrupt means by Venezuelan government officials and redistribute them to the Venezuelan people.

According to two unidentified ministers who were present, the topics of the meeting also included distribution of economic and humanitarian aid to Venezuela including debt relief, if the current president Nicolas Maduro is replaced by a government the officials deem to be legitimate and committed to economic reform. Elections are scheduled for next month, but will be boycotted by the opposition which sees them as performative.

The meeting follows a particularly uneventful Summit of the Americas last week, which U.S. President Donald Trump decided not to attend.

Treasury Secretary Steven Mnuchin commented on the importance of action from the international financial community.

“Concrete actions are necessary to restrict the ability of corrupt Venezuelan officials and their support networks from abusing the international financial system.”

The Maduro government has been implicated in a number of corruption scandals, and while there have been several sweeps in state owned companies, the problems persist.

In February, Venezuelan journalists from Armando.info uncovered a scheme regarding the country’s food-distribution program and inflated prices. Also in February, five officials from the state-owned oil company PDVSA were charged with corruption for allegedly paying more than US$27 million in bribes. Panama recently blacklisted Venezuela for being a high-risk for money laundering, which led to a break in diplomatic ties between the countries.

Venezuela’s GDP growth is currently -15.0 as it enters its fifth year of a recession, and inflation continues to rise. Maduro has refused all humanitarian aid, and said that the U.S. sanctions imposed by Trump are economic sabotage.