Two years after the Panama Papers revelations, governments of the world’s 20 largest economies are still not doing enough to ensure companies are transparent about their true owners, according to a Transparency International report released Thursday. 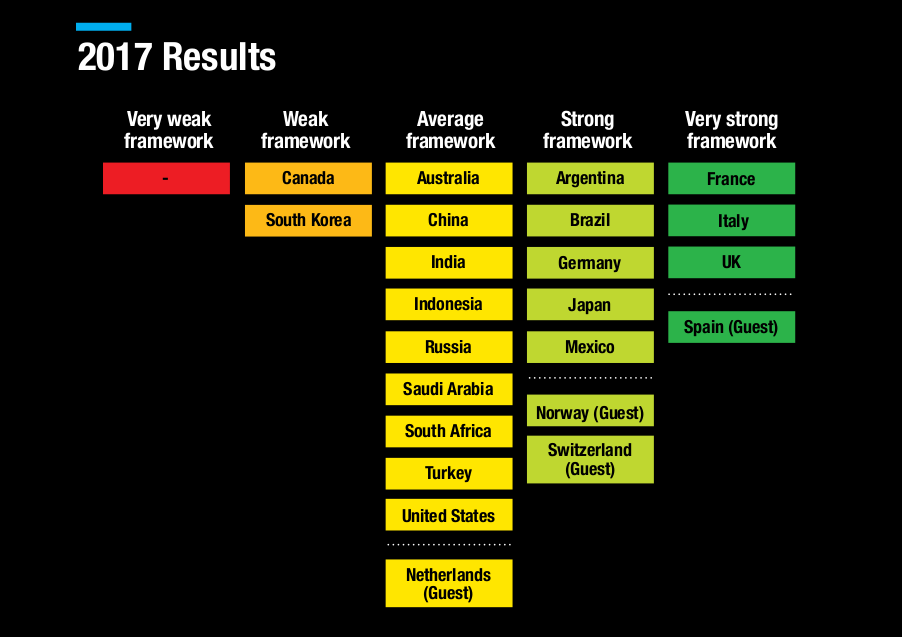 Overall ranking of G20 Countries (From: Transparency International)The majority of those countries still do not know who the true owners and controllers of companies are and do not keep corporate information up to date.

Countries that do not belong to the world’s top economies have, on the other hand, made significant improvements.

“G20 countries should be leading the way to put a stop to this,” said Maggie Murphy, senior global advocacy manager at Transparency International. “While they drag their feet, countries such as Afghanistan, Ghana and Nigeria have been moving forward with plans for important mechanisms like public registers of beneficial ownership.”

One exception is the UK, the only G20 country that established a publicly-available central register of beneficial ownership information. Brazil, France, Germany, Italy and guest country Spain do have registers but they are not publicly available.

The UK’s overseas territories still create a problem because their legal systems obscure the identities of those who establish companies there. In 2017, Transparency’s UK division identified £4.4 billion (US$ 6.26 billion) worth of property bought with suspicious wealth in the UK. Some 90 percent of the companies used to buy those properties were incorporated in the British Virgin Islands.

The countries with the worst assessment are Canada and South Korea, which are the only two countries in the report that have an overall “weak beneficial ownership transparency framework.” In 2015, however, six countries still received this ranking.

In general, 11 G20 countries have “weak” or “average” legal frameworks to provide transparency with regards to beneficial ownership. In 2015, that number was fifteen. While there has been an improvement in this regard, the “progress is too slow,” according to the report.

Argentina, Australia, Brazil, Germany, India, Saudi Arabia, South Africa and Turkey have not made any risk assessment to combat money laundering within the last five years.

In none of the countries are register authorities required to verify company information and only Argentina, Italy and Spain might verify information if something looks suspicious.

Verifying corporate information “is weak across the board,” according to the report. Authorities are therefore not able to investigate suspicious financial cases and banks and businesses cannot be diligent.

Nine countries allow financial transactions where the beneficial owners cannot be identified and eight countries still permit nominee shareholders to not disclose for whom they are actually working.