Liberian Newspaper Sued But Not Silenced

Front Page Africa has been sued US$ 1.8 million for defamation in the latest attempt to silence the Liberian newspaper – another reason to change Liberia’s libel laws, the Committee to Protect Journalists (CPJ) said Thursday. 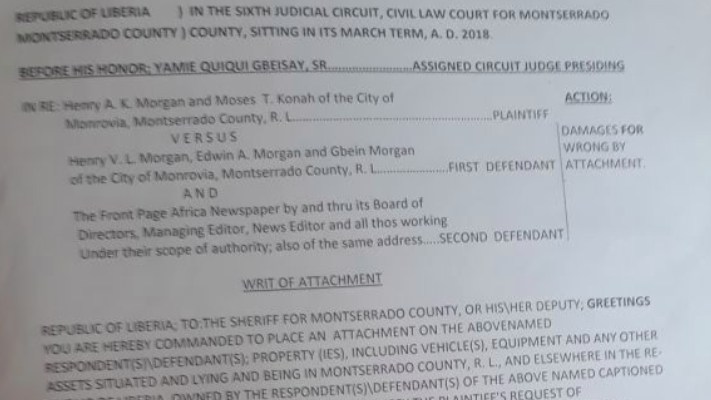 Front Page Africa said it has been subject to harassment for reporting critically on successive governments for a long time. In this case, the paper was sued for running an ad, although two other outlets ran it too but were not sued.

Rodney Sieh, the newspaper’s owner and editor, said they will not cave and accused the country’s President George Weah and his inner circle of harassing his paper.

“The government’s actions today will not keep us from doing our investigative work but will only strengthen us to do more,” Sieh told OCCRP.

“President Weah’s failure to keep his supporters from raining threats on the media falls on his record and his presidency," he said. "Should anything happen to me or any member of my staff, our blood will be on his hands."

Using suits and harassment are a part of Liberia’s history, according to CPJ’s Africa Program Coordinator Angela Quintal.

“Liberia has a troubling history of libel lawsuits where applicants ask for exorbitant damages simply to harass and intimidate journalists, resulting in their imprisonment or the closure of news outlets,” Quintal said. “The government should move swiftly to reform Liberia's libel laws to guard against their abuse in this way."

The lawsuit is centered around a land administration notice published in March. One of the plaintiffs is Henry Morgan, who has ties to the President’s party, the Coalition for Democratic Change (CDC).

Other papers also published the notice but were not sued. Front Page Africa already received two summons to appear in court. Sieh thinks that the arrests were unnecessary and feels that they are being singled out.

“Contrary to what the ministry of information has stated, we are strongly convinced that the government is definitely behind what happened today and the Presidency is in the know,” Sieh told OCCRP. “Several other newspapers published the same land announcement as we did but only our newspaper was singled out. Was it really necessary to arrest and shut down our premises?”

A week before the summons, CDC member Jefferson Koijee – the mayor of Monrovia, where the paper is based –  condemned the newspaper for its critical reporting on the government.

Koijee attacked Sieh, who is also a member of CPJ, personally for his “unprofessional attacks on the presidency," Front Page Africa said.

At the same time, Sieh and the paper were being harassed by anonymous social media users who claimed that the newspaper was anti-government.

One of the social media posts showed a picture of Sieh’s home and threatened with arson, Sieh told CPJ.

Sieh thinks that the Facebook threats are ploys of the government.

“We are aware that government operatives have been using fake social media accounts to attack our credibility and issue threats against me and my staff - with some suggesting arson,” he said.

The summons was delivered on April 9 by court sheriffs who detained seven journalists for three hours and temporarily shut down the office, Front Page Africa’s editor Lennart Dodoo told CPJ.

Dodoo said that they were released after their lawyer negotiated for a $ 350,000 bond to be paid the next day. They started publishing again the same day.

The depiction by government officials of the paper as anti-government is not fair as the paper ran a lot of positive stories as well, according to Sieh.

Liberia's Information Ministry denied any connection between the government and the lawsuit in a statement released on the same day as the summons.

“The government’s denial is the oldest trick in the book – as we have seen in other countries across Africa, they hide behind civil lawsuits to strike and suppress the press,” Sieh said.

Front Page Africa was asked to retract the advertisement by the lawyers of the now-plaintiffs in March, after which the paper published a clarification on the notice.