In the heart of Calabrian mafia country, a farmer cooperative was damaged for the fourth time in the past year, reported il Fatto Quotidiano on Wednesday. But the farmers say they will bow down to no one - not even the ‘Ndrangheta. 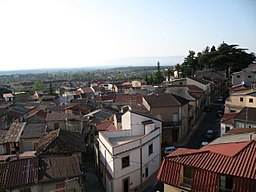 Polistena, Reggio Calabria (By: GJo Wikimedia Commons)“We will win this battle,” said Antonio Napoli, the vice president of the Valle del Marro farmer cooperative which describes itself as “organic farming and ethical and responsible tourism on lands free from the mafias.”

“This land has been raped and needs to believe in itself,” he declared.

The Italian province of Calabria is the cradle of the ‘Ndrangheta - one of the most vicious and dangerous crime syndicates in the world, with thousands of members and an annual turnover measured in billions.

The cooperative is made of farmland and buildings located on the outskirts of the town of Polistena in the municipality of Gioia Tauro - ‘Ndrangheta’s very stronghold. The complex was once seized from the mafia and now sells olive oil, different kinds of pesto, aubergines and citrus fruits.

Two hundred kiwi seedlings were destroyed during the most recent attack and in the past months parts of the irrigation system have been tampered with and stolen.

“It took four years of hard work for this yield,” said Antonio Napoli, the vice president of the cooperative.

But the farmers don’t even think of giving up. The cooperative received many messages of solidarity and offerings of help to recover from the damage.

“We are giving wings to hope and we are convincing young people to stay and invest in the agricultural sector,” Napoli said. “ We are convinced that the loser here is the mafia.”

One of the cooperative’s trainees, Francesco Trimboli, also believes in the future of their courageous endeavor.

“We want to break down the ‘Ndrangheta by starting a healthy development that can bear fruit to the entire community of Gioia Tauro,” Trimboli said.