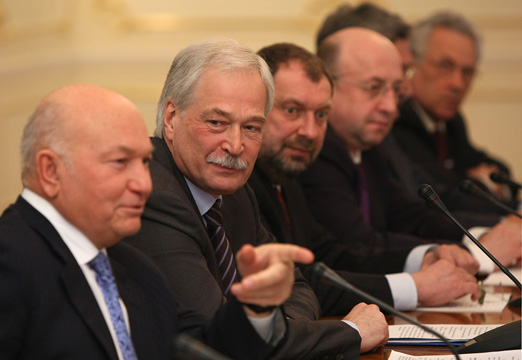 Vladislav Reznik, pictured center (Photo: Russian Government) The two mafia groups, which made their names smuggling heroin in St. Petersburg when Vladimir Putin was deputy mayor in the 1990s, allegedly laundered more than US$ 62 million through Spanish real estate with the help of those standing trial, according to The Guardian.

Reznik is a member of Putin’s United Russia party, and previously was the first deputy chairman of the Finance Committee in the lower house of Russia's parliament, according to The Moscow Times. In 2010, Forbes Russia magazine named him the Duma’s most influential lobbyist.

Reznik has also been among the close Putin associates to appear as a member of the board of directors of Bank Rossiya, according to The Atlantic.

Although the Spanish branch of Interpol issued an international arrest warrant for Reznik and his wife, Diana Gindin, in 2016, he appealed his arrest warrant and had it overturned.

On Monday Reznik told the Madrid court that he had only agreed to show up for court “because I'm not guilty of anything and I trust the Spanish justice system," according to Russia's state-run RIA Novosti news agency.

Prosecutors have demanded jail sentences of five-and-a-half years for most of the suspects and fines which could reach up to 100 million euros, according to the BBC.

The specific investigation that brought about the charges in this case date all the way back to a probe Spanish authorities conducted from 2008 to 2011.

Revelations from the probe include Reznik’s close ties to Russian crime boss Gennady Petrov, who was arrested in Spain in 2008, but fled the country after posting bail.

Documents related to this probe and acquired by The Atlantic show that Reznik bought Petrov’s first Mallorca home, stocking it with fine wines and expensive art. Reznik and Petrov socialized and business together, at one point entertaining another visiting Russian politician Petrov's yacht. They even shared a private jet when they flew from Russia to Spain to relax, do business, and launder money.