The Kenyan government has refused to receive EU election observers in Nairobi to release a report on the democratic shortcomings of the nation, following disputed elections in 2017, the EU said on Wednesday. 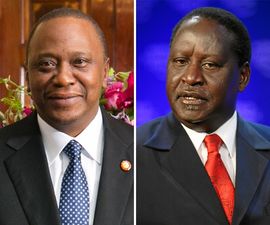 Uhuru Kenyatta, President of Kenya (L) and Raila Odinga, three-time presidential candidate (R) (Photo: Amanda Lucidon and WEF, CC-BY-SA-2.0)The move led the EU election observation mission (EOM) to accuse the Kenyan government of trying to postpone its publication. The Kenyans are said to have wanted the report’s publication delayed until their new government was in post but the opposition cast doubt on these claims.

Anti-corruption campaigners such as John Githongo are keen to stress Kenyatta’s previous administration was "the most corrupt in Kenya's history." In its 2016 report on perceptions of corruption, Transparency International ranked Kenya at 145 out of 176 countries.

The anti-corruption organisation cited the incompetence and ineffectiveness of anti-corruption agencies, and blamed the failure to punish individuals implicated in corruption to be the key reasons for its dismal rating.

The EOM was first invited to the East African state to monitor the presidential and parliamentary elections but relations soured after it became clear the report would be critical.

The elections were blighted by the nullification of the first presidential election result, an opposition boycott of the re-run and dozens of deaths. Kenyatta is now seeking to consolidate his legitimacy over a nation deeply divided on ethnic lines.

Kenyatta’s last term was riddled with controversy and claims of corruption. In the so-called Afya House scandal, US$50 million in funds earmarked for free maternity care went missing from the Ministry of Health.

It was alleged that this money was diverted to a company owned by family members of Kenyatta. The US suspended aid to Kenya over their subsequent corruption concerns.

Last year, Kenya’s anti-graft chief told Reuters that a third of the state budget - the equivalent of about $6 billion - was lost to corruption every year.

Meanwhile, in October 2016, Kenyatta told voters he could not tackle corruption because his “hands were tied”, criticising the judiciary and other agencies for not doing more.

Against this worrying backdrop, the two presidential candidates went to the polls in August 2017 but the election was declared "invalid, null and void" by the supreme court because of unconstitutional illegalities and irregularities such as the transmission of the results.

“Kenyans went from high hopes for these elections to many disappointments and confrontations,” said Chief Observer, Marietje Schaake, Member of the European Parliament from the Netherlands, noting that the Kenyan government had “made it very clear it was not prepared to receive us”.

At the time, Odinga, told the BBC that "it is now clear that the entire [electoral commission] is rotten [and] that the real election results were never shared with Kenyans. Someone must take responsibility."

The final report identified a persistent lack of trust in the Independent Electoral and Boundaries Commission by the opposition and others.

Odinga withdrew from the second election, on October 26, because he believed that the electoral commission, which regulates elections, had not been properly reformed and could not guarantee a dependable result.

The EOM said that electoral reform needs to be carried out well in advance of any election, and to be based on broad consensus. It criticised hasty legal amendments and the late appointment of the leadership of the regulatory institutions.

It reported key concerns around politicians from both sides intimidating independent institutions, some violence by opposition protesters and the use of disproportionate force by security forces that saw live fire used as dozens died and sexual violence allegedly used.