Pakistan’s Finance Minister, who after the Panama Papers leaks was indicted of corruption, was relieved from his duties to undergo cardiac treatment in the U.K.. media reported Thursday. 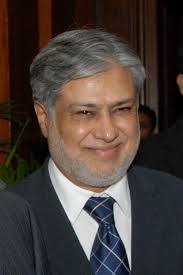 America.gov CC BY-SA 2.0Ishaq Dar, 67, was indicted in Septemberbut he continued to serve as finance minister amid strong criticism from Opposition parties. However, he left the country a month ago to seek medical treatment in London.

On Monday he sent a letter to the Prime Minister, asking for three months of sick leave because his doctor had told him to avoid international air travel.

On Tuesday the court in Pakistan proclaimed he was a fugitive but prime minister Shahid Khaqan Abbasiongranted him sick leave on Wednesday.

Dar has been continuously missing more than three weeks of hearings in front of the anti-graft agency, the National Accountability Bureau.

Dar’s absence comes at a critical time for Pakistan. The country is trying to raise billions from foreign investors to take the pressure off from the official foreign currency reserves.