Ukrainian prosecutors sent on Friday their indictment against former tax chief and close confidant of President Petro Poroshenko to court, claiming he abused his office and forged documents related to US$ 75 million in tax evasion. 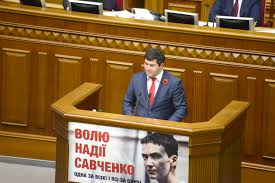 Nasirov was arrested on March 2 before being released on a US$ 3.7 million bail five days later.

After finishing a three month-long pre-trial investigation, the Special Anti-Corruption Prosecutor’s Office said on its Facebook page that “the defense has not provided evidence that would suggest the need to change the legal status away from criminal offenses, and moreover, towards the closure of criminal proceedings.”

“The procedural heads are convinced that there is indisputable evidence that the suspect committed the crimes of which he is accused,” it added.

If convicted, Nasirov faces up to 11 years behind bars.

According to the Kyiv Post, the prosecutors called for the court to appoint a preliminary court hearing in no more than five days following the receipt of the indictment and assign a reserve judge to the case.

Additionally, Finance Minister Oleksandr Danylyuk objected Nasirov’s attendance of Donald Trump’s inauguration ceremony in January, saying that neither the Prime Minister nor the Ministry of Finance had approved the trip. He also requested a check on whether Nasirov included the US$ 250,000 for the seat he occupied at the inauguration on his declaration.

However, the National Agency for the Prevention of Corruption did not find that Nasirov's trip had contravened Ukrainian law, the paper reported.

The Joint Committee on Inaugural Ceremonies of the U.S. Congress gave out around 250,000 free tickets that were distributed among American citizens for free, and the Agency wrote that the suspended tax service chief was invited to the inauguration by American friends.