Vietnam sentenced the former general director of one of the country’s major banks to death on Friday following a lengthy trial of 51 officials and bankers involved in misappropriating US$ 69 million, according to Reuters. 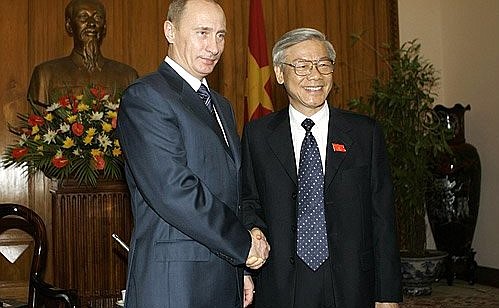 Vietnamese Communist Leader Phu Trong with Putin (kremlin.ru)Nguyen Xuan Son, ex Ocean Bank director, was given the death penalty for his involvement in a fraud scandal after a month-long trial. Son maintains his innocence and his lawyer will appeal the verdict.

Son's co-conspirator, Ha Van Tham was sentenced to life in prison. Tham is one of Vietnam's richest men and used to be the chairman of Ocean Bank. He turned himself in admitting to "lending violations" at Ocean Bank although he denied all graft allegations, according to the BBC and AFP.

Vietnam has vigilantly been cracking down on anti-corruption efforts. The country has one of the highest ratings on Transparency International's Corruption Perceptions Index, ranking 113 out of 176 countries.

Experts say this recent corruption purge is politically motivated. While the country is concerned with rooting out graft, many suspect Nguyen Phu Trong, Vietnam's communist leader, is purposefully convicting those associated with his enemies, media reported.

The government denies these claims saying it is the government's responsibility to curb "wrongdoing and corruption," according to Le Ti Thu Hang, a foreign ministry spokeswoman.

According to Amnesty International, Vietnam is one of the world's most frequent executioners. The country has recently replaced firing squads with lethal injections as its form of capital punishment implementation.

New US Bill Tackles Money Laundering in the Antiquities Trade