Italy Arrests 24 for Links to ‘Ndrangheta, Including a Mayor

Italian police arrested on Tuesday the mayor of a city near Milan, accusing him of corruption, which authorities revealed during a wide-ranging investigation into the ‘Ndrangheta’s ramifications in Northern Italy. 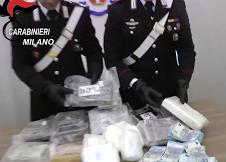 Schermata 2017-09-27Edoardo Mazza, mayor of Seregno, is accused by prosecutors of having eased planning permissions in favour of a real estate developer linked to the Calabrian crime group in exchange of votes.

The indictment, seen by IRPI, details how during his victorious mayoral campaign in May 2015 Mazza, a member of Berlusconi’s centre-right party, received the support of prominent local builder Antonino Lugarà.

Prosecutors allege that, following his election, Mazza gave the green light to Lugarà’s project to build a supermarket in Seregno despite this being in breach of local planning rules.

“Every promise is a debt, isn’t it?”, Mazza was recorded saying to Lugarà in a wiretapped conversation after the project’s approval.

Arrest warrants linked to this multi-strand investigation have been issued against 24 people on various counts of mafia-type association, extortion, drug trafficking, corruption and others.

The probe, coordinated by the Antimafia Prosecutor’s Office in Milan, has confirmed the ‘Ndrangheta’s ability to infiltrate political and business sectors in one of Italy’s wealthiest regions. It comes seven years after the landmark investigation ‘Infinito’ which in July 2010 revealed for the first time the full strength of the crime group in the area and led to the arrest of over 150 people.

But, despite the crackdown, the local ‘Ndrangheta clans have been able to rise again from the ashes, according to prosecutors. “They can infiltrate the establishment with extreme ease,” Antimafia prosecutor, Ilda Bocassini, told reporters on Tuesday, according to Ill Fatto Quotidiano. “And, after seven years, we know this is the system,” she said.

Investigators have also highlighted the violent nature of the groups active in the outskirts of Milan. Armed threats, physical assaults and intimidations were used by alleged affiliates to maintain control over the territory and gain commercial advantages.

In one of the most brazen episodes, after leaving a club in Cantu, a city near Como, in the early morning hours, a 22-year-old linked to Morabito allegedly shot at the car following a brief row with the driver.

“The mafia is not silent. Neither in the South nor in the North,” prosecutor Alessandra Dolci said on Tuesday. “It is so not silent, that violent acts, beatings and abuses are committed by the ‘Ndrangheta at the main square of Cantù without any remorse.”