A US court sentenced on Wednesday a retired officer of the Royal Canadian Mounted Police to five years and two months in prison for laundering money obtained from the illegal import of hundreds of narwhal tusks from Canada. 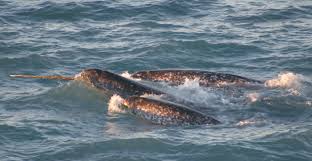 According to the authorities, Gregory Logan, 59, pleaded guilty to smuggling more than 250 Arctic narwhal tusks from 2000 to 2010 from Canada into the US.

He was purchasing tusks from native Inuits in northern Canada and channeling them into the US in a modified pickup. He kept the tusks in a shipping store in Ellsworth, Maine, before selling them to collectors all across the US. The ill-gotten money was then sent back to Canada.

The officer created sometimes bogus provenance certificates to mislead customers into believing that the tusks had originally legally belonged to a private collector in Maine.

He sold the narwhal tusks at a market value between US$ 1.5 million and US$ 3 million.

Logan has been sentenced by a Canadian court to four months of detention at home and to a US$ 350,000 fine for smuggling narwhal tusks. He was then extradited in 2016 to the US to be judged on 10 money laundering charges.

Narwhals are toothed whales native to the Arctic which are valued for their ivory tusk that can grow to more than eight feet in length.

National and international laws thus make it illegal to import narwhals, or their parts, into the US for commercial purposes. Non commercial importation of these animals must be accompanied by a permit and must be declared to US Customs and Border Protection and the U.S. Fish and Wildlife Service.

Logan was arrested in Canada in 2013, based on information given by a Washington ivory and antiquities dealer who had bought 38 tusks from him. The dealer had been working with federal prosecutors since after he was himself arrested for the illegal possession of ivory from walruses, sperm whales and tusks of the narwhal.