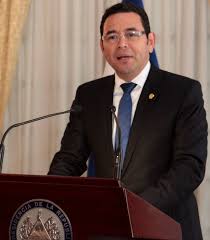 The attorney general, Thelma Adana, and United Nations-backed head of the International Commission against Impunity in Guatemala (CICIG) and former Colombian prosecutor, Ivan Velasquez, had sought in August to investigate Morales over allegations that he misappropriated some US$ 825,000 in funds for his 2015 campaign.

Morales tried to silent Velasquez by ordering his immediate expulsion from the country two days later, but the presidential decision was quashed by the Constitutional Court.

The request for further investigation into the President was backed up by the Guatemala Supreme Court and a Guatemala congressional committee which both found that there was enough evidence of financing abuses.

The Congress voted by only 25 of the 158 members in favor of stripping Morales' immunity, where at least two-thirds of the chamber is needed to pass such a decision.

Many believe that those who protected Morales from prosecution intended to hamper CICIG's current investigations into their financing abuses.

“Members of Congress are making a pact of corrupt officials now that they are afraid of being investigated themselves for illegal electoral financing,” Alvaro Montenegro, head of the anti-corruption organization Justicia Ya, told Reuters.

However, Alejandro Rodríguez, director of justice programs for Impunity Watch, outlined that if the vote precludes any future inquiries into Morales' suspected misconducts, the entities that financed the campaign are not immune from prosecutors' investigations, according to the New York Times.

Morales denied all wrongdoings and contended that the vote reflects a sign of the country’s unity and “democratic maturity” of its institutions.