"Fearless and Outspoken" Indian Journalist Shot Dead Outside her Home

Gauri Lankesh, an Indian journalist and editor known for her criticism of far-right Hindu politics, was found lying in a pool of blood on her doorstep Tuesday. 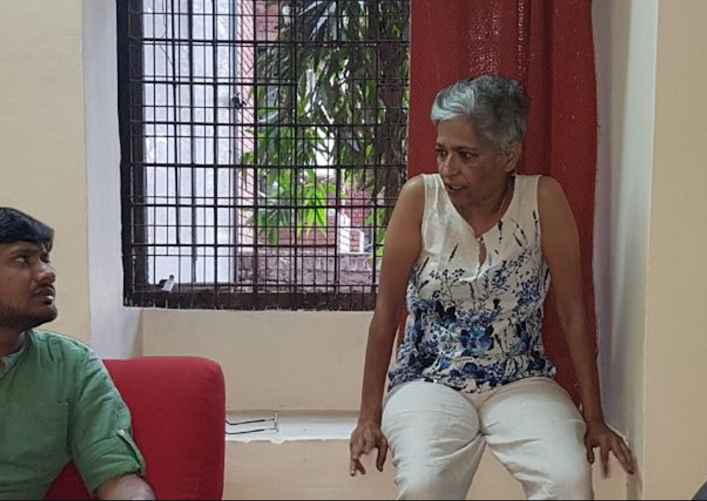 Gauri Lankesh (Photo: Twitter)According to police, she had returned to her home in Bangalore and was opening the gate when gunmen who had arrived by motorcycle shot her in the head and chest, the BBC reported.

Lankesh, 55, was known to be an intrepid journalist and her views on caste structure and support for minorities had angered far-right Hindu groups, according to Al Jazeera.

Hours before her murder, Lankesh had shared an article that condemned the Indian government’s planned deportation of Rohingya refugees on her Facebook page.

Her father, P Lankesh, founded and edited the independent Kannada-language newspaper Lankesh Patrike, which she took over after his death in 2000. Five years later, she began her own weekly publication, Gauri Lankesh Patrike (GLP).

In November 2016, Lankesh was charged with defamation for an article she published in 2008 that accused BJP MP Prahlid Joshi of corruption, according to The Wire.

In an interview the following month with Narada News, she said "as a citizen of India, I oppose the BJP’s fascist and communal politics."

She accused the party of misinterpreting Hindu ethics and declared she opposes the cast system which she called "unfair, unjust and gender-biased."

She also called the 2002 massacre of Muslims in the Gujarat province "Narendra Modi’s genocide."

Back then, Modi accused Pakistan’s secret service of being behind the death of 58 Hindu pilgrims who were burned when a fire engulfed a train passing through the province.

The accusation ignited inter-communal riots in which more that 1,000 people were killed, mostly Muslims.

"My Constitution teaches me to be a secular citizen, not communal. It is my right to fight against these communal elements," she said.

While hundreds attended Lankesh’s state funeral, her death sparked protests Wednesday in at least 10 cities across India, according to the Hindustan Times.

Authorities have set up a special investigation team to probe her murder.

Her death follows three similar assassinations of outspoken secularists and rationalists since 2013, investigations into which have seen little progress, according to the Committee to Protest Journalists.

India ranked 13th on the organization’s latest Impunity Index, a measure of countries where the murderers of journalists go free.

Female journalists critical of Hindu nationalists have been threatened with rape and assault, while BJP ministers have called them "presstitutes," a mix of press and prostitute, according to the BBC.

Ganesh Devy, a prominent novelist, told Al Jazeera that Lankesh was "the most fearless and outspoken crusader for the marginal people."

"Her killing is an ominous portent for dissent in democracy and a brutal assault on the freedom of press," said the Editors Guild of India in a statement, the Hindu reported.