US: 89 White Supremacists Drug Traffickers Convicted to a Millennium in Jail

Prosecutors in Texas wrapped up Monday the largest prosecution in US history of white supremacist gang members, after convicting 89 for drug trade and the use of firearms. 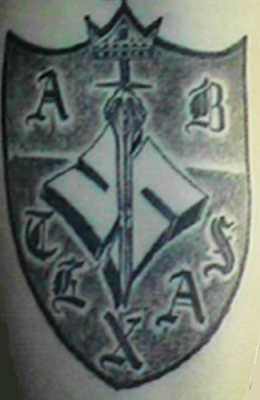 Aryan Brotherhood of Texas tattoo (Photo: Ormr2014 CC BY-SA 3.0)Prior to this case, only six of the 89 defendants had no previous convictions. The rest had already been convicted of a combined 736 crimes, including burglaries, sex and child abuse and murder. Fifteen were deemed "career offenders".

They have received a combined total of over 1,070 years in prison.

The convicts were all either members - some high-ranking - or associates of the Aryan Brotherhood of Texas, the Aryan Circle, the Irish Mob, the Dirty White Boys and the White Knights.

According to the Department of Justice press release, all six are violent white supremacist gangs whose ideology in recent years has taken a backseat to traditional criminal enterprises like drug-dealing.

Thirty seven of these, whose nicknames included Casper, Charlie Brown, Pacman, Peppermint Patty and Queen Saltine, were arrested in November 2014 for their roles in a methamphetamine distribution conspiracy.

The second phase of the investigation in November 2015 saw a further 52 arrested. A further two defendants were charged, but one died before trial began, while the second remains a fugitive in Mexico.

The 89th and final suspect convicted, 29-year-old Jeramy Weatherhall, was sentenced Monday to 20 years in prison for possession of methamphetamine with the intent to distribute.

All 89 were collectively held accountable for 956kg of methamphetamine, conservatively valued at little under US$ 10 million, plus the possession and use of 88 firearms and dangerous weapons.

Despite their allegiances to different white supremacist gangs, the gang members often collaborated with each other and with Mexican cartel to distribute drugs around Texas, along with other illegal ventures.

Some members acted as intermediaries and brokers for narcotics trafficking, using stash houses to store supplies and negotiating the acquisition, price, delivery and payment for methamphetamine, before supplying it to their co-conspirators.

Each of the convicted was linked to another either directly or through another co-conspirator, some through familial or romantic relationships. Two belonged to Mexico’s La Familia Michoacana drug cartel, while others were Peckerwoods, a term used to describe individuals who are not gang members but share the ideology and align themselves with white supremacist organizations.

"The Aryan Brotherhood of Texas and the Aryan Circle have essentially been decimated in north Texas," said U.S. Attorney John Parker.

Formed in the 1980s inside the Texas prison system, the 2,000-strong Aryan Brotherhood of Texas had grown into one of the largest and most violent white supremacist gangs in the US, having been involved in robberies, kidnappings, assaults and murders, according to the Houston Chronicle.

In August 2016, however, prosecutor David Karpel said that investigations had left the gang "in chaos, absolute chaos," according to the Houston Chronicle.

"It has reduced their power; they don’t know who to trust. They are still trying to figure out who cooperated and who didn’t," he said.