The leader of an Estonia-based Russian organized criminal group that has been trafficking illegal drugs since the 1990s has been arrested in Mijas, Spain, the Spanish National Police announced Tuesday.

Vyacheslav Gulevich – aka Slava Kemerovsky – the Russian-born leader of the Kemerovskaya gang, is one of the most influential organized criminal figures in Estonia, according to Crime Russia. 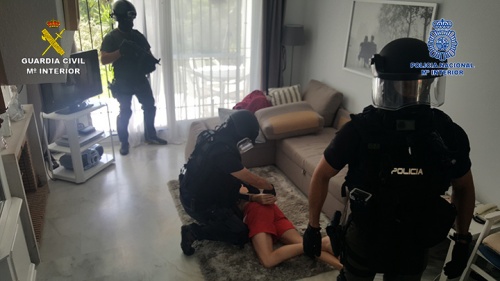 His gang is one of the oldest in Estonia, and also considered one of the most ruthless.

Gulevich was arrested on August 2 in a southern Spanish beach town while three other members of his gang were taken into custody in Tallinn in a simultaneous operation performed by the Spanish National Police, Civil Guard and the Estonian Police.

All four are being held on suspicions of international drug trafficking, although the Spanish National Police said that the organization "engaged in all types of criminal activity."

Gulevich was allegedly in Spain in order to set up a local base of operations for the Kemerovskaya group and to launder illegally-obtained money.

The crime boss’s relocation may have also been motivated by security concerns related to conflicts between Russian criminal groups in Estonia, the Spanish outlet El Mundo reported.

Gulevich had close ties to the late top leader of Russian organized crime in Estonia, Nikolai Tarankov, who demanded payments from the 15 most powerful "thieves in law" operating in drug, arms and human trafficking, extortion and prostitution.

The meetings Tarankov held were called the "round table," and it was at one of them that he withdrew his support for one of the thieves in law, who then ordered his assassination in 2015. The killing sparked a violent struggle for control of Estonia’s criminal underworld.

Estonian authorities have been investigating the Kemerovskaya organization’s activities for more than two years, according to the Spanish police.

Up until his capture, Gulevich had been directing the group’s activities in Estonia’s drug market from Spain.

Police seized accounting documents, hidden cash, computers, an ax and a large knife during Gulevich’s arrest in Mijas, and now consider the group to be disbanded internationally.

However, more arrests could be made in Estonia.

"I do not exclude that the circle of suspects in this criminal case will expand," said State Prosecutor Vahur Verte, according to the Estonian outlet Delfi.