Ex-Prime Minister Nikola Gruevski is among the many former high-ranking public officials charged. 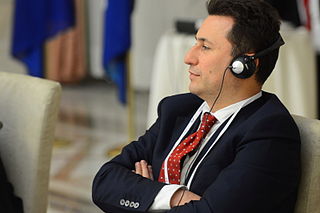 The SPO was established as part of an EU-brokered deal to hold early elections after opposition parties accused Gruevski and his counter-intelligence chief of illegally wiretapping more than 20,000 people, Reuters reported.

Janeva said she was recommending detention for 18 of the people charged, which Macedonian media confirmed included Gruevski. Basic Court Skopje 1 judges will rule Friday on the detention requests, but no decision had been announced as of press time.

The charges came one day before the SPO’s June 30 deadline to press charges in the wiretapping investigation – a timeline outlined by the office’s five-year mandate.

Speaking at a press conference after the charges were announced Thursday, Gruevski described the SPO action as an unprecedented attack on his VMRO-DPMNE party.

"This is a political, not legal process. SPO lost its impartiality and credibility [a] long time ago," he said, MIA reported. "The aim is to break VMRO."

The SPO has opened 120 corruption investigations since its founding in 2015, and prosecutor Janeva vows to continue the office’s work throughout the term of its mandate.