Romanian authorities said Tuesday they detained six people suspected of belonging to an organized criminal group that trafficked children to Paris and forced them to steal and beg on the streets.

Investigators described how minors were taught to steal wallets, mobile phones and other valuables from victims’ bags and pockets. 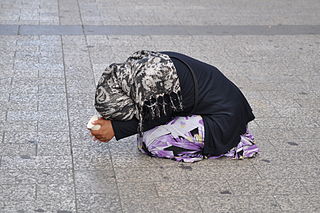 Beggar on the Champs-Elysees in Paris, France (Photo: Kristof Verslype, CC BY 2.0)

They were also instructed in communication codes, how to hand-off stolen goods and getaway strategies, including the use of violence, if necessary.

The Romanian Directorate for the Investigation of Organized Crime and Terrorism (DIICOT) described the conditions in which the children were forced to make a daily living as "slavery."

On Monday, the Directorate said that 25 homes were searched and 120 people will be questioned in connection with a scheme that started in 2015. Since then more than 70 children between the ages of 10 and 13 are believed to have been exploited, often by their own parents.

Adults allegedly trained the minors how to commit robberies in Romania’s northeastern Iasi district before transporting them to Paris, where they were "forced to steal constantly."

Parents were teaching their children that stealing is a "normal way of life," the statement said. Once transported to camps on the outskirts of Paris, the minors were threatened that they wouldn’t be allowed to go home if they didn’t steal, Balkan Insight reported.

According to DIICOT, French criminal investigations have found that the number of thefts committed by young Romanians within the Paris metropolitan region has risen sharply since 2011 – even before this group was formed.

In this case, investigators believe that stolen goods and money were shipped from France to Romania in packages, carried by individuals or sent through the international money transfer system.

French and Romanian law enforcement authorities began collaborating on the case in 2016, the Associated Press reported.