Tunisia declared a "war on corruption" on Wednesday after authorities arrested three businessmen and a customs officer a day earlier,” Al Jazeera reported. 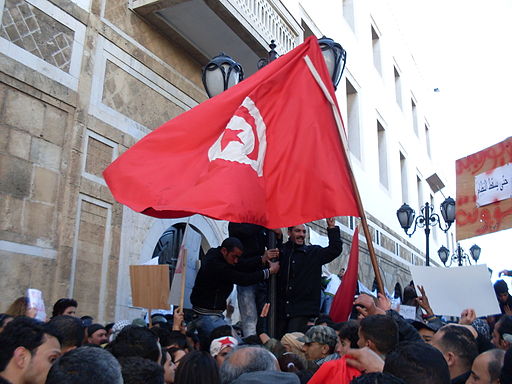 Protest in Tunisia (Photo: M.Rais, CC BY 2.0)The detained are accused of graft and "plotting against state security" by financing protests over economic instability in Tataouine, a city in southern Tunisia, and in other regions of the North African country.

"I want to reassure all Tunisians that the government will see this war on corruption through to the end."

Tataouine's new governor, Mohamed Ali Barhoumi, resigned on Wednesday, just weeks after he was named to the position, saying in a Facebook post that it was "for strictly personal reasons."

The arrests follow weeks of mounting tensions between protesters who are demanding jobs and a share in revenue from local gas and oil companies, and security forces.

Earlier this week, Anouar Sakrafi, a young protester was killed by a national guard vehicle and 50 others were injured. The government has said Sakrafi's killing was accidental.

Prime Minister Chahed has vowed to fight corruption since taking office last year. The latest unrest poses difficulty for his government as it tries to appease international lenders and consolidate Tunisia’s transition to democracy.

Tuesday’s arrests triggered applause from Tunisians on social media, who called for the launch of an anti-graft probe such as Italy’s “Clean Hands” campaign in the 1990s.

Others, however, are hoping the arrests were not a "smokescreen" at a time when the authorities faced increasing social unrest.

"We hope it's a serious first step in the war against corruption and the corrupt, and not an attempt to appease protests in Tataouine and elsewhere," Youssef Belgacem from anti-corruption NGO I-Watch said.

Tunisia was ranked 75th out of more than 170 countries in Transparency International’s 2016 corruption perceptions index. In 2010, it ranked 59th.