Tajikistan has launched an "unrelenting assault" on lawyers by harassing, prosecuting and imprisoning those who take up defense of government critics, according to an Amnesty International report released Tuesday. 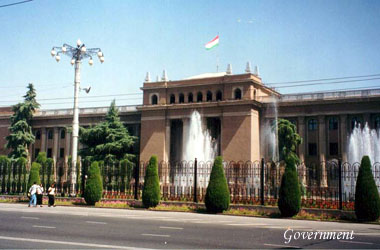 Parliament of the Republic of Tajikistan in Dushanbe (Photo: The California Military Department)"The country is increasingly turning its back on human rights and the rule of law," states the report.

Lawyers "have either found themselves charged with national security-related offenses, imprisoned, or have had to flee the country for fear of reprisals against them and members of their families. Those who have been prosecuted have faced closed unfair trials resulting in harsh prison sentences," the report said.

"To be a lawyer, and particularly a human rights lawyer, comes with unprecedented risks in present-day Tajikistan," it stated.

Fayzinisso Vohidova, who had reportedly been interrogated several times by Tajik security services in the weeks preceding the incident, was detained for eight hours at the border with Kyrgyzstan before being told she "had no right to leave Tajikistan".

She had previously criticized the government’s imprisonment of another human rights lawyer, Buzurgmehr Yorov, who was arrested in September 2015 while defending the leaders of the banned political party IRPT.

In October 2016, a court sentenced Yorov to 23 years in prison for "arousing national, racial, local or religious hostility."

After denying the charges, he was found guilty two months later of "disrespecting" the court and insulting government officials, and sentenced to a further two years in prison.

During his initial arrest, police seized documents relating to the case defending the banned opposition party.

His brother and defense lawyer in the same case, Jamshed Yorov, was forced to flee Tajikistan to evade charges of disclosing state secrets.

On Friday, Tajikistan will celebrate the "Professional Day of the Lawyer," in honor of the establishment of the country’s first Bar Association 95 years ago.

According to Amnesty’s report, amendments to the law on the legal profession moved in November 2015 the licensing of lawyers from the independent, non-commercial Union of Lawyers into the hands of the government.

The amendment also forced all lawyers to pass new qualification exams or else lose their license. By May 2017, only around half of previously licensed lawyers had successfully re-qualified.

Amnesty called for the immediate release of Yorov and other imprisoned lawyers and accused the Tajikistan government of stifling legitimate dissent and political opposition by framing them as threats to national security.