The former governor of Russia’s Mari El Republic was arrested Thursday on suspicion of taking US$ 4.4 million in bribes from a poultry factory owner. 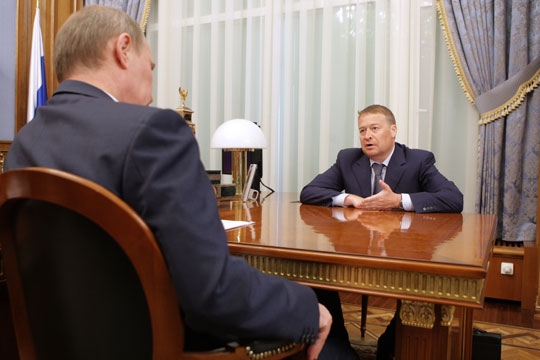 Leonid Markelov with Putin (Photo: Government of the Russian Federation)He is one of a number of lower-level Russian officials arrested since anti-corruption protests broke out March 26.

Investigators accuse Leonid Markelov of accepting the bribe from businessman Nikolai Krivash in return for patronage, a protection racket and help in obtaining state support for developing the factory, TASS reported.

The money was allegedly transferred through the bank account of local TV channel ‘Region12’.

Maria Kozhevnikova, the head of the channel, is suspected of acting as trustee. All three are currently under investigation.

Searches are reportedly underway in the defendants’ homes, including the Moscow apartment of Markelov’s daughter and the home of his wife.

Krivash’s Akashevskaya factory is a high-tech poultry-farming complex that can produce up to 118 million eggs and 230,000 tonnes of poultry a year, according to Pitreport Nieuws.

The Agricultural Bank has been financing its development since 2005, and in 2014 poultry in the Mari El Republic became the Bank’s largest project.

Markelov stepped down last week after governing the region for 16 years.

Local media initially reported that he had voluntarily resigned to rest and write poetry. However, according to Crime Russia they have since updated the story to say that Putin dismissed him following the bribery accusations.

In March, Putin admitted that Russia has a serious problem with corruption, CNN reported. Earlier that week, however, opposition leader Alexei Navalny was jailed for organizing unsanctioned protests against corruption.

The following week, the governor of the Udmurtia region was also arrested for allegedly accepting bribes.