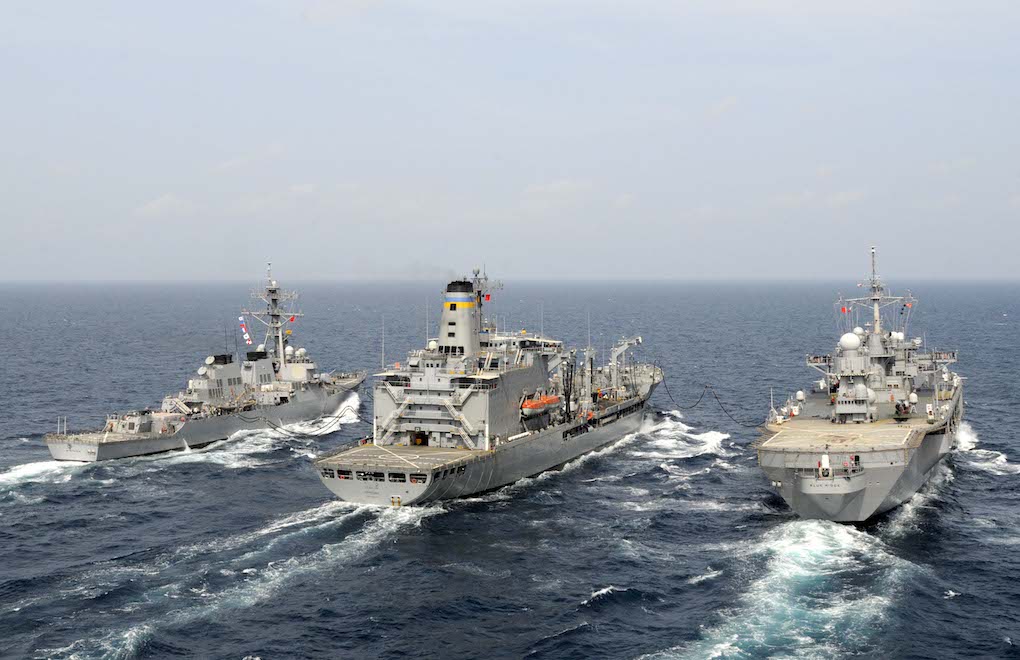 The U.S. 7th Fleet command ship USS Blue Ridge on the right (Photo: U.S. Navy Mass Communication Specialist Brian A. Stone)The officers are the most recent to be accused of taking bribes from Leonard Glenn Francis, known as “Fat Leonard,” who is at the center of the worst corruption scandal in Navy history.

The former CEO of Malaysian defense contracting firm Glenn Defense Marine Asia was arrested in 2013 in an international operation that lured him from Singapore to San Diego, according to The Washington Post.

Since then, “Fat Leonard” has pleaded guilty to defrauding the Navy and U.S. taxpayers tens of millions of dollars.

Twenty five people have so far been charged in connection with the corruption and fraud investigation. Of those charged, 20 are former or current U.S. Navy officers and five are Glenn Defense Marine Asia executives, according to an indictment unsealed by The United States Justice Department Tuesday.

The nine suspects were arrested Tuesday throughout the country on various charges including bribery, conspiracy to commit bribery, obstruction of justice and making false statements to federal investigators, according to the Justice Department.

Among them was Rear Adm. Bruce Loveless, a senior Navy intelligence officer previously posted at the Pentagon.

The defendants allegedly accepted bribes such as US$ 25,000 watches, US$ 2,000 boxes of Cohiba cigars, US$ 2,000 bottles of cognac and US$ 600-per-night hotel rooms from Francis, who allegedly sponsored wild sex parties for the officers in exchange for contracts to resupply Navy ships and submarines through Asia, The Washington Post reported.

Authorities estimate that Francis and his firm overcharged the Navy some US$ 35 million, according to Voice of America.

In one example, during a Navy port visit to Manila in May 2008, five of the officers attended a multi-day party “with a rotating carousel of prostitutes,” at the Shangri-La Hotel, and allegedly drank hotel’s entire supply of Dom Pérignon champagne. Francis covered all expenses, exceeding US$ 50,000, according to The Washington Post.

The defendants were senior officers assigned to the Navy’s Seventh Fleet — the largest fleet in the U.S. Navy — responsible for guarding an area that spanned from Russia to Southeast Asia and the Indian Ocean, Acting Assistant Attorney General Blanco said in a statement.

“This is a fleecing and betrayal of the United States Navy in epic proportions, and it was allegedly carried out by the Navy’s highest-ranking officers,” said Alana W. Robinson, acting U.S. attorney for the Southern District of California. She added that the defendants “actively worked together as a team to trade secrets for sex, serving the interests of a greedy foreign defense contractor, and not those of their own country.”