EU authorities said  that Greek and Spanish police have arrested 17 people suspected of smuggling baby eels worth some €10 million (US$ 10.6 million) from the EU to China this year. 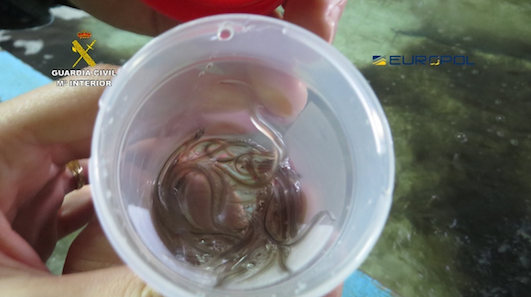 Seized baby eels (Photo: Guardia Civil)Coordinated by Europol and Eurojust, and involving Spain, Portugal, Italy, France, Greece and the United Kingdom, eight alleged members of the international criminal network were arrested in Spain and nine in Greece, according to Spanish police.

Another € 240,000 (US$ 254,193) was seized when network members were coming from a meeting with two Chinese citizens who were among the arrested and worked for the company that facilitated the money transfers from Hong Kong, Spanish police said.

Investigators from Spain’s Guardia Civil’s Environmental Protection Services launched the operation when they suspected a company based in the Spanish city of Tarragona could be illegally exporting eels.

They discovered that the Spanish company legally and illegally acquired eels from Spain, and then received more eels from France, Portugal and Italy without asking about their origin, the police said.

The baby eels were poached from Andalusia where fishing for anguilla eels is illegal; Valencia where there are strict regulations; and Ebro where fishing is allowed as long as fisherman declare the eels they caught.

Once some 1,000 kilos were collected, the eels would be trucked to Greece before being concealed and flown over to Hong Kong and marketed in China.

There are strict regulations in place for the international trade of the anguilla eel because the species is in danger of extinction.

The 17 detainees are charged with smuggling, document falsification, wildlife harm and money laundering.